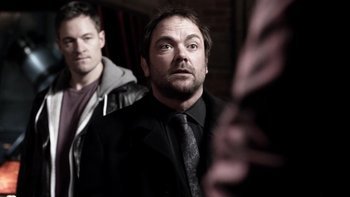 I'll make this quick — you've been possessed by an angel.
Written by Andrew Dabb.

Grieving for Kevin's death and Sam's disappearance—physical and otherwise—Dean calls in Castiel. The two of them have little choice but to ask Crowley's help in getting Sam back. In return Crowley demands a supervised, shackled outing. The three of them visit Cecily, a plant that Crowley has working at the NSA who puts them on the trail of the Impala.

In Sam's body, Gadreel continues through Metatron's hit list. This is easy, even pleasurable, in the case of Thaddeus, an angel who had tortured him in Heaven and who is now occupying a teen pop idol. He has more difficulty with Abner, an old friend and fellow prisoner who tries to convince him that he can still make better choices. Nonetheless, Gadreel still kills Abner and Dean arrives just in time to see Gadreel washing the blood off Sam's hands.

Back in the Men of Letters compound, Dean and Castiel have Gadreel bound, but the angel is defiant in holding onto Sam's body. Castiel can't possess Sam without consent that Gadreel isn't about to give, but Crowley reminds them that demons "can take what [they] want". At Dean's acquiescence, Castiel burns off Sam's anti-possession tattoo and Crowley goes in to tell Sam what has happened and get him to evict Gadreel.

In the aftermath, Abaddon appears to finish off Crowley. He challenges her to an election for Hell's "hearts and minds" and disappears. Elsewhere, Sam expresses anger and disappointment at Dean for lying to him. A shaken Dean resolves to hunt on his own from now on, leaving Sam behind.