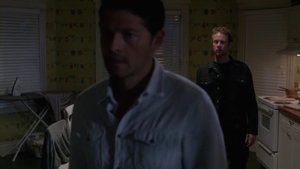 Stop? I won't stop... until I wash the planet clean of all suffering.

For this episode = 3 humans and 1 angel.