Houses of the Holy 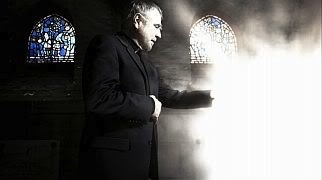 I call upon the Archangel Raphael, master of the air, to make open the way. Let the fire of the Holy Spirit now descend, that this being might be awakened to the world beyond.

"I think I learned a valuable lesson. Always take down your Christmas decorations after New Year's or you get filleted by a hooker from God."
—Dean

People are murdering people they don't even know in Providence, Rhode Island

, and the murderers claim an angel told them to do it.

Sam and Dean investigate murders in Providence, Rhode Island, where the killers claim an angel told them to kill the victims. Despite the fact that the murderers and the victims did not know each other, the murderers are at peace, convinced they performed God's will by eliminating a person responsible for evil. As Sam and Dean search the victims' homes, they find each victim was guilty of a horrific crime, such as murder or pedophilia. They also realize that the victims all attended the same church, Our Lady of the Angels.

Sam and Dean visit Our Lady of the Angels and talk to Father Reynolds. They find out that a young priest, Father Gregory, was recently murdered on the steps of the church. When Sam and Dean go to investigate Father Gregory's grave in the church crypt, Sam starts to see the statues of the angels in the crypt shake. Then there is a blinding light before he faints. He tells Dean that he saw the angel and the angel told him that he needs to kill a man who is going to do something evil. Sam will know who to kill when he sees the sign from the angel.

Dean convinces Sam to perform a séance to call Father Gregory's spirit and prove that this is the work of his spirit and not an angel. While getting supplies for the séance, Sam sees a man surrounded in blinding light and knows this is the man the angel told him to kill. Dean stops Sam from going after the man, telling Sam to perform the séance and promising to follow the man and make sure the man does not do anything evil. Father Reynolds interrupts Sam as he is performing the séance, and is present when Father Gregory's spirit appears. Father Gregory believes he is an angel who came in answer to Father Reynolds' prayers to be delivered from the violence of their neighborhood. Sam and Father Reynolds manage to convince Father Gregory that he is not an angel, but that he is a spirit who is not at rest. Father Reynolds administers the Last Rites, and Father Gregory moves on. Dean follows the man Sam was told to kill, and sees him attack and almost rape a woman. Dean manages to get the woman out of the man's car, but the man escapes. Dean tells the woman to call 911 and takes off after the man in the Impala. The man pulls through an intersection, causing a truck to come to a screeching halt. A pipe flies off of the truck and impales the man through the heart in his car.

Sam, who believes in God and prayer, is disappointed that his encounter was with a vengeful spirit instead of an angel. Dean, who is very skeptical about the existence of God or angels, is moved enough by the sight of what he saw, including the death of the man he was chasing, to consider the possibility of divine intervention.

For this episode = 2 humans and 1 ghost. A third human is murdered in the beginning of the episode, but it happens off screen.