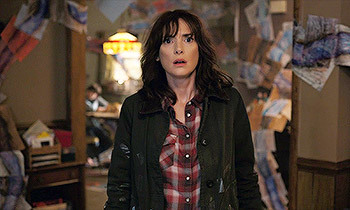 Hopper explores the infected tunnels but ends up getting trapped when his exit hole is sealed off and vines emerge from the walls and trap him. Will realizes Hopper is in danger.

Lucas tells Max the truth about Will's disappearance last year. While she at first doesn't believe him, she notices how deadly serious he is about it, and resolves to give him the benefit of doubt.

Jonathan and Nancy meet up with Bauman and tell him everything they know about the events in Hawkins, using Owens' recorded confession as evidence. Bauman readily believes them and agrees that the story needs to be told, but points out that it is far too incredible for the general public to swallow. The three eventually agree to tell a modified and more believable version of the story about Barb dying from toxins released by the lab. Owens and the lab scientists realize the soil from the infected pumpkin patches is part of a hive mind.

Dustin, realizing that Dart is growing increasingly dangerous, traps the creature in his root cellar and recruits Steve to fight it.

Eleven hitchhikes to Terry's house. She telepathically communicates with Terry, seeing images of another child kept in Hawkins Lab and of Terry being crippled by forced shock therapy.

By examining Will's drawings, Bob figures out Hopper's location, and he and Joyce enter the tunnels to rescue him. They are joined by scientists from Hawkins Lab. As the scientists burn the vines filling the tunnels, Will screams in agony and collapses.