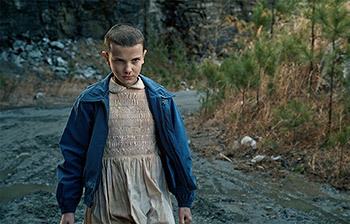 Jonathan pulls Nancy back through the portal and saves her from the monster. Quite traumatized by the experience, she asks him to stay the night with her. Later, Steve sees them together through her bedroom window and assumes they are dating. Nancy and Jonathan resolve to kill the monster and purchase supplies from an army surplus store. Steve and his friends confront them there, and it comes to a fist fight between Steve and Jonathan, during which the latter inadvertently assaults a police officer and is arrested.

In the aftermath of getting knocked out by Eleven, Lucas is furious with her and Mike, and declares he is going to search for Will on his own. Dustin tries to encourage his friends to settle things between them, but to no avail.

Hopper meanwhile meets up with Joyce, and shares what he has learned so far with her. The two realize that the child from the laboratory is not Will, but is undoubtedly connected to the case. They track down Terry Ives, who is catatonic and tended by her sister Becky. Becky explains that Terry underwent Project MKUltra testing while unknowingly pregnant; she believed her daughter Jane was kidnapped by Brenner at birth. Joyce and Hopper conclude Eleven is likely Jane.

Eleven shoplifts Eggo waffles. She recalls being asked to contact the monster and accidentally opening the portal to the Upside Down in the laboratory basement.

While searching for Eleven, Mike and Dustin are ambushed by school bullies Troy and James. Troy holds Dustin at knifepoint and demands Mike make a suicidal jump into the lake where Will's body was discovered. Mike jumps but is levitated to safety by Eleven, who scares away the bullies.

Lucas, meanwhile, scopes out the Hawkins Laboratory from a vantage point. He sees a fleet of Hawkins Power and Light vans leave the lab and realizes that his friends are in danger.