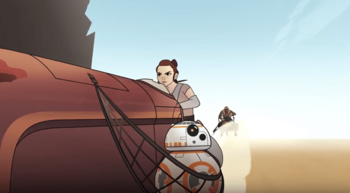 Timeframe: Between scenes in The Force Awakens, shortly after "Sands of Jakku"

Rey and BB-8 take off on a speeder to flee scavenger thugs who want to steal BB-8.