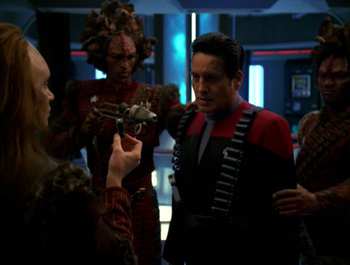 Hey, didn't they leave the Kazon behind ten or twenty thousand light years ago?
After Voyager is fractured into different time zones by Yet Another Spatial Anomaly™, Commander Chakotay—aided by a suspicious Captain Janeway from before their Enemy Mine alliance—must restore the ship to its normal state. In doing so they encounter opponents and allies from their past, present and future.