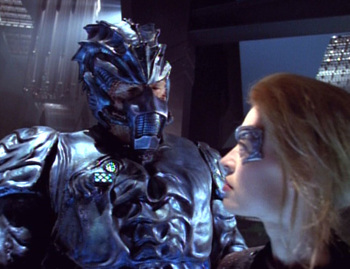 "You will find our captain a formidable opponent and our ship heavily armed."
"Good. Strong prey makes for a better hunt."
Starfleet sends a signal to Voyager along the network of relay stations, containing messages from the family and friends of the crew. But a Hirogen hunting party is not pleased by aliens using 'their' network, and captures Seven of Nine and Tuvok when they're sent to repair it.