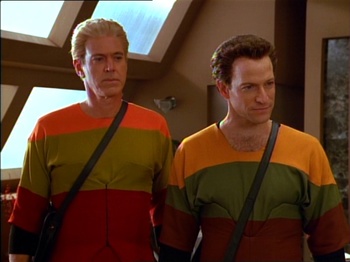 70,000 light years across the galaxy, and we're still meeting Human Aliens. Welcome to Star Trek on UPN.
Voyager is traveling on its long journey home when a shockwave from a nearby planet rocks the ship. A massive explosion, caused by a volatile power source called polaric ion energy, has destroyed an entire pre-warp civilisation. When an away team is sent down to investigate, Paris and Janeway get themselves trapped in a temporal fracture, sending them back in time to the day before the disaster.