With the launch of Season 10 and the start of the Iconian War, the Foundry Community were given upgrades that included the Herald mobs. Discussions between many members of Starbase UGC on twitter resulted in an idea: what if the Foundry told stories of the war against the Iconian Forces that weren't seen in the main storyline. And thus the "Tales from the Frontlines: An Iconian War Anthology" was born.

A series of stories set in the Iconian War, the anthology covers tales of the war as seen from various angles. Every author was given free reign to tell whatever tale they want, and any author was and is welcome to add their tale to the anthology.

Missions as part of the anthology can be identified with the [ICO] tag.

Because of the open nature of the anthology, mission authors and/or players are encouraged to add the tales independently to this page. They are also in order of their full submission to the Tales of the Iconian War Anthology thread in the STO Forums, here.

Catastrophe at Cait by sirboulevard 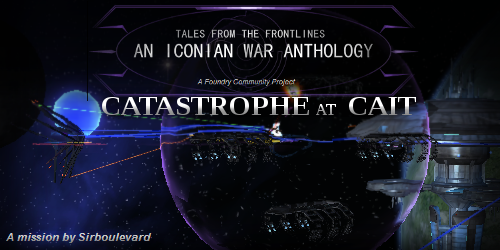 An emergency distress call from Cait leads you and your crew to the homeworld of the Caitians, under siege by Iconian forces. With the assistance of the U.S.S. Pathfinder and your crew, can you save the Caitians from utter annihilation? 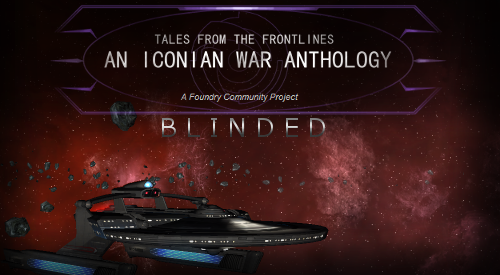 The R.R.W Panthera is transporting an Iconian artifact back to the Romulan Flotilla for study. But an Elachi jamming network is set directly in Panthera's path. An ambush is all but certain.

You must ensure the Panthera's safety by taking down this network and engaging any Elachi ships in the area. 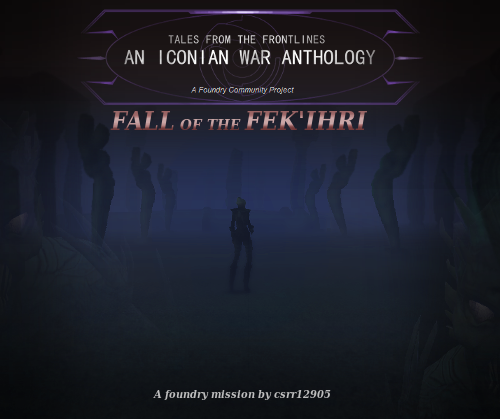 Klingon Intelligence has located what they believe is an Iconian Gateway capable of reaching Fek'ihri space. You must join Task Force 72 as it finds and assaults what may be a critical Fek'ihri installation, hoping to deal this Servitor race a crippling blow before the Iconians can bring them into this war.

Fall of the Fek'ihri contains Examples of the following tropes.

Convergence by nak3dsnake aka SFC

In the wake of the Herald invasion of New Romulus, the Iconian Resistance has begun tightening security along key strategic sites in both the Alpha and Beta Quadrants.

One such system is Vhoran Prime, a former Iconian colony home to an inactive Iconian gateway.On the eve of a major breakthrough inside the gateway complex, extreme subspace activity in the system breaks all forms of communication with Doctor Grissom's research team and Intelligence fears the worst. You are enlisted to join the crew of the U.S.S. Umbra in order to infiltrate the system, locate the source of the disturbance, and secure the area by any means necessary.

An Alliance force has discovered a Preserver installation deep in the Delta Quadrant, far from the front lines of the Herald War. After teaming up with the Enterprise, the player makes contact with the survey team in the Kendren System where Voth patrols are lurking uncomfortably close.

The Preserver installation has no info about the Iconians, but it does have some interesting tech explaining more about how the Preservers "guided" evolution throughout the galaxy. The meeting is cut short when Voth troops beam down and claim that the Preservers contradict Doctrine and must be removed. In the firefight that ensues, the Voth kill the science team and accidentally activate an ancient "Genetic Modification Probe", which is designed to travel from world to world and rewrite DNA into humanoid form. Voth and science team bumbling causes the probe to malfunction, lock onto the Jenolan Sphere, and head there with the intention of rewriting every humanoid life form in the galaxy into bacteria.

They've already struck the homeworlds of the Romulan Republic and the Klingon Empire.Now, the Heralds have targeted the heart of the Federation.Or... have they?

The Iconian war wages across the Milky Way. No one is safe from wrath of the Heralds. An assault of Bajor may be far out of the way of the enemy, but there may still be secrets in Deferi space, not to mention countless innocent lives. Bajor must not be allowed to fall.

Note: I've done my best to make this mission (as with my others)playable by Starfleet or Rom Republic characters.