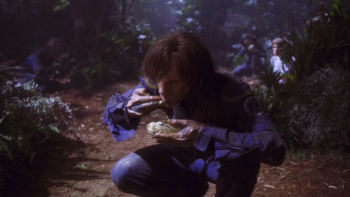 This one's just... really weird.
We see some aliens in space suits chasing down a more primitive alien and killing it with flame throwers, then we cut to Enterprise at night. Trip is having a neuro-pressure session with T'Pol, which is interrupted when Archer calls her to the bridge. He has discovered the last planetary stop of the Xindi ship and a new type of Xindi who appear to be primates. Wanting more info, he orders a course towards them.
Advertisement:

They arrive at the planet and find no signs of life, but a metallic signature. Archer, T'Pol, Malcolm, and Hoshi go down to the planet, and they find a Xindi landing craft, where some charred, non-Xindi corpses are. They keep exploring, but then Malcolm turns into an alien who's behaving primally. T'Pol (whose temples have swollen but she's otherwise fine) goes back to the landing craft to find Archer having made the same transformation. She contacts Enterprise and calls for security, only for Archer to attack her (while speaking in an alien language). She stuns him, but Hoshi, who has also transformed, attacks her. T'Pol tries to run away, but falls over and is knocked unconscious.

The altered Archer, Malcolm, and Hoshi carry the unconscious T'Pol, tied up, and lay her down. She wakes up and asks to be untied, which Archer does, and she tries to use the universal translator. Meanwhile, on Enterprise, Phlox has found T'Pol's bio-sign. Trip, despite Phlox's warnings, decides to go down and search for the team, deciding to wear an EV suit.

T'Pol has gotten the universal translator up and running and has determined that the transmogrified crew members want to go to a place called Urquat to find the rest of "their people". She can't convince them to go back to the shuttle, so she decides to observe them for a while. At one point, they fight over some food that Malcolm picked from a tree.

Trip, Chang, and Palmer go down to rescue the away team, but Malcolm knocks out Chang and Hoshi chases away Palmer. Trip manages to stun Malcolm, but then Archer attacks him and cracks his helmet. T'Pol interrupts Archer and asks if he recognises Trip. Archer hesitates, but gets distracted by Palmer. T'Pol decides to stay behind with Archer and Hoshi, but tells Trip to take Malcolm back to Enterprise.

Phlox observes Malcolm in the decon chamber, where he finds out that the transformation is caused by a virus, but that T'Pol is immune because Vulcans have "K-cells", which are neutralising it. He thus concludes that T'Pol's DNA is the answer to the cure. Two alien ships then intercept Enteprise and declare them under quarantine.

They also want to board Enterprise, which Trip vetoes, but the alien commander, Tret, says that his people have studied the virus for sixty years and it must be "eradicated". Trip tries to point out that Malcolm's in isolation, and invites Tret onboard to discuss the situation but threatens a fight if he boards the ship by force. Meanwhile, on the planet, Archer dreams about reaching Urquat and gushes to Hoshi about it. T'Pol tries to tell them that Earth is their home, but they don't believe her.

Tret boards Enterprise and tells Phlox and Trip about the virus, revealing that it's very contagious and led to millions of his kind being killed to prevent spread. He also reveals that it was created by an alien race called the Loque'eque, who did it to propagate after going sterile, and it causes the infected to turn into Loque'eque and obsess over going home. Tret gets word from his ship that more infected are on the planet and orders a containment team together. Phlox reveals that T'Pol's immune, and wants to work with Tret, but Tret wants to work on his own and threatens to use force on Phlox if stopped. Trip then remembers that during the neuro-pressure session, T'Pol bit into a peach, and decides to get Phlox a DNA sample from there.

On the planet, Archer and Hoshi find Urquat, but it's in ruins. T'Pol suggests they go to Enterprise to find out what caused it, but Archer refuses, then starts to wonder if it was the Vulcans that destroyed Urquat. The containment team arrives, leading to a fight, during which Archer infects one of the aliens, who is subsequently killed. The aliens prepare to torch Archer and Hoshi, but then Trip and a MACO appear and stun them. Then, T'Pol finally convinces Archer to follow her back to the shuttlepod.

They go back to Enterprise, when the alien containment team starts firing at the ship. Tret hails them and orders them to drop out of warp. Trip begs them to give them time, and Tret refuses, until he sees Archer and Hoshi, who are partly cured. Finally realising that a cure is possible, the aliens call off their attack. Thus, they leave, giving the aliens some of Phlox's medicine to prevent further outbreaks.