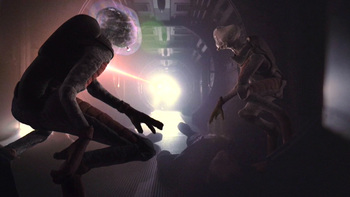 The NX-01 crew finds out the hard way that space is not for the timid.
Enterprise launches a subspace amplifier, when Malcolm detects an unknown alien ship. Archer tries to hail them, but they don't reply, then they go away. Malcolm finds out that they have a shield preventing them from being scanned. Hoshi wonders if the signal didn't make sense to the aliens, while T'Pol wonders if they didn't understand their motives and Travis wonders if they simply found them uninteresting.
Advertisement:

Hoshi then talks to Archer in private, revealing she tracked down Malcolm's parents, Stuart and Mary. They talk to Archer, wondering if Malcolm is in trouble and not even knowing what his job is. Archer says that Malcolm is not in trouble and is an armory officer, to which Mr. and Mrs. Reed reveal that the Reeds have been navy men for generations. Archer then reveals that he plans on making a birthday dinner but doesn't know what Malcolm likes. His parents don't know either, since he always ate what he was given as a kid, so Archer orders Hoshi to find out.

After a casual conversation between Archer and Trip, the alien ship returns. Archer tries to hail them again, but they again don't reply, then they scan the ship with a device that makes a painfully high-pitched noise. Then, they fire (leaving no casualties) and leave again. The shields went down briefly when they fired, so Malcolm was able to get some scans— there are at least fifteen bio-signs of an unknown species.

Archer, T'Pol, and Trip assess the damage caused by the aliens' attack— it came perilously close to breaching a bulkhead that, if breached, would have sucked Trip and twelve others into space. In the turbolift, Archer wonders to T'Pol if they should go back to Earth, since Enterprise is not equipped for certain attacks and they didn't have time to install the phase cannons. However, when he brings the issue to Trip and Malcolm, they figure that they can install them within two weeks. Archer accepts, but also tells Travis to send the ship home so that the staff at Jupiter Station can rewire the rest of the systems.

While Trip, Malcolm, and the rest of the engineers get to work building the phase cannons, Hoshi talks to Malcolm's sister Madeline. Unfortunately, she doesn't know his food preferences either, only remembering a time he did a week-long fast for an experiment. Hoshi then talks to Malcolm's friend Mark Latrelle, who remembers that Malcolm did eat fish at a restaurant once, but he mainly only went there because he had a crush on a waitress and probably actually hates fish. Travis interrupts, asking how things are going, but Hoshi, revealing that she's also talked to his uncle Archie and his two aunts, was unsuccessful. T'Pol interrupts, suggesting that Hoshi ask Malcolm directly.

In the mess hall, Hoshi tries asking Malcolm how his meal is and offering to cook, but he's distracted by the schematics he's reading. She asks what his favourite food is, but he simply vetoes her idea of cooking. She reveals she has a hotplate in her quarters, but he takes this the wrong way, thinking she's coming onto him. Hoshi then leaves, with both of them feeling embarrassed.

The alien ship attacks again, and Malcolm is unable to contact the bridge and armory. He orders the crewmen to report to their stations, then the alien ship activates a dampening shield, turning off the lights. They then launch a shuttle, turn off the main systems, and enter through the launch bay doors. Archer enters the launch bay with a security team to find two aliens, who knock two of the security officers out and probe them. The humans fire phase pistols at the aliens, but they're immune, and then walk away. Archer sends his team after the aliens and has Phlox tend to the two injured crewmen. The alien shuttle then leaves and docks with its mother ship, which fires at Enterprise's port nacelle and warps away.

Phlox tells Archer that the two crewmen were scanned invasively but will recover. Trip then says that the impulse drive will be working within a few hours, but the warp core needs a few days to repair. The crew then tries to contact the Vulcan High Command and ask for help, but can't because Echo One and Echo Two have been destroyed.

Trip and Malcolm return to their work on the phase cannons. Malcolm, annoyed at the setback, wants to bypass the EPS grid and have the cannons draw power directly from the impulse engines, but Trip wants to build the cannons the proper way. He thinks that Malcolm's way could damage the ship and kill the crew, but Malcolm thinks it's an "acceptable risk" and if they do it the normal way, the aliens might come back too soon. Trip says that as the chief engineer, it's his job to decide which risks are acceptable, and Malcolm grudgingly agrees.

Some time later, Archer asks Trip for a progress report and Trip says the engines will be back online the next night. Archer then wonders if the crew really isn't ready to explore space, but Trip dismisses him. Trip then visits Malcolm in the armory, having changed his mind about the new phase cannon installation, and gives him permission to do it.

Two days later, they test the new phase cannon on an uninhabited moon, but despite trying to simply take a few meters off the surface, they instead blow up a whole mountain and shake the ship. Malcolm reveals that this was due to the phase modulators being overloaded and and that the impact blew out a lot of plasma coils. T'Pol detects something strange in Launch Bay 2, so she, Archer, Trip, and Malcolm head down. T'Pol traces the reading to a device on the ceiling that's generating energy and tapped into most of the ship's systems. Archer sends the aliens a message, saying that he and the others will stop at nothing to defend their ship, then destroys the device.

Hoshi enters sickbay (where Phlox has released his patients) and asks him about Malcolm's favourite food, but all he knows is that Malcolm enjoys eggs, pancakes, sausages, and bacon. Then, he remembers that he does have an idea, but it would mean going through Malcolm's medical files. Hoshi says that she's under captain's orders, and Phlox reveals that Malcolm has many allergies and has been eating pineapple to get rid of his bromelain allergy.

The alien ship returns, and the Enterprise tries to hail them again. They reply, but with Archer's message, edited to say, "You are defenseless. Prepare to surrender your vessel." Archer orders Malcolm to fire the phase cannon, but it barely makes a dent. Archer wonders if they can overload it again, but Malcolm says that doing that would cause damage to the inside of the ship. Archer is still willing to do it, but Trip has an alternate solution— repolarise the gravity plating to absorb the recoil, which would shunt the excess energy to strengthen structural integrity. They do this, then fire at the alien ship again, disabling it, and the aliens go away at impulse. Trip and Malcolm give damage reports, and Archer decides that they shouldn't go home after all.

Then, everyone has a birthday party for Malcolm, complete with a pineapple cake, which he enjoys.