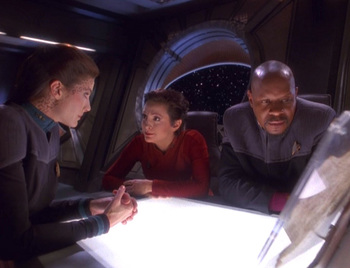 The debut of the grey uniforms.
On the eve of Bajor's entry into the Federation, Sisko locates the ruins of the ancient lost city of B'hala on Bajor. As the visions that are guiding him prove potentially fatal, Sisko must choose between faith and his life.