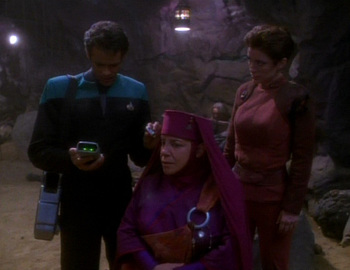 Do Bashir, Kira and Kai Opaka look confused to you? That's because Opaka died a few minutes ago.
Kai Opaka pays a visit to DS9, her first trip off of Bajor in her lifetime, in order to see the Celestial Temple. As no ships are scheduled to come through the wormhole, Commander Sisko decides to take the Kai through on the runabout Yangtzee Kiang. Major Kira (who notices that the Kai seems distracted) and Doctor Bashir (who has nothing better to do) accompany Sisko and the Kai to the runabout pad, where Opaka meets Chief O'Brien. Realizing that the chief has a daughter, she gives him a necklace to give to her.

Opaka is delighted to go through the wormhole, a trip that Sisko notes is the smoothest to date. As they prepare to return, the Yangtzee Kiang picks up a weak subspace signal that the Kai insists on investigating, as she notes that she doesn't get out much. They track the signal to a moon in a nearby system, but the runabout is shot down by the moon's orbital defense systems. The Yangtzee Kiang crashes; although Sisko and Bashir manage to escape injury, and Kira is a little banged up, the Kai is dead. Kira doesn't have much time to mourn, though, as they find themselves surrounded by a group of unfriendly faces.

The leader of the group, Golin Shel-la, takes the crew back to their cave, and identifies his people as the Ennis. He tells them that they are in conflict with a group known as the Nol-Ennis. As it turns out, the planet is a penal colony, where the two groups were banished when authorities on their homeworld couldn't settle their conflict. The Nol pick this time to stage an attack on the Ennis camp, and several members of the two sides are killed before Kira drives off the Nol. Before the Ennis can recover, though, Kai Opaka appears at the mouth of the cave.

Bashir examines the Kai, who appears to be healthy; she doesn't remember dying in the crash, only waking up outside the runabout. While Bashir continues his examination, Sisko and Kira aren't impressed with the lack of defenses that allowed the Nol to stage such a brazen attack. Shel-la reveals the reason why they don't bother, as the fallen rise up as if nothing's happened - nobody on this moon can die, at least not for long, thanks to artificial microbes. When they realized they couldn't die anymore, defensive tactics became pointless. Sisko suggests that Starfleet could rescue the two sides, resettling them separately and allowing them to end the fighting. Bashir, meanwhile, goes back to the runabout to salvage the computers and analyze the microbes.

As O'Brien and Dax begin searching for the Yangtzee Kiang, Sisko convinces Shel-la to have the Ennis and Nol-Ennis call a cease-fire and meet at a neutral site, near the runabout. Kira stays back at the cave with Opaka, who helps the major overcome her guilt for the things she did during the Cardassian occupation. Sisko makes his offer to both sides, but neither side takes him seriously, and the cease-fire is quickly broken. Bashir emerges from the runabout in time to save Sisko from being attacked, and the doctor tells the commander that they can't afford to die on this moon, not even once.

Bashir explains that the biomechanical microbes that revive the Ennis and Nol-Ennis cannot survive in any environment other than that moon, and thus they - and Opaka - are stuck here, as once revived their lives become dependent on the microbes. The Kai reveals that she knew she would not be returning to Bajor, and that she has answered the call of the Prophets - that it is her destiny to try to find a way to bring peace to these people who haven't known anything but fighting for untold ages. She states that she is there to begin their healing process - and that Kira had been there to begin her own.

The Rio Grande finds the planet, and manages to disrupt the satellite defenses enough to allow transport. Bashir suggests that he might be able to disable the microbes to allow the people to die for good, but when Shel-la suggests he would only take the opportunity to wipe out the Nol-Ennis, Bashir drops the idea. Sisko insists that they will find a way to get Opaka off the moon, but she interrupts him, and tells him her work is there now, but that their paghs will cross again. With that, Sisko, Kira, and Bashir beam up.