SpongeBob tries to prove he's tough enough to enter the Salty Spitoon, the roughest, toughest joint under the sea.

No Weenies Allowed contains examples of: 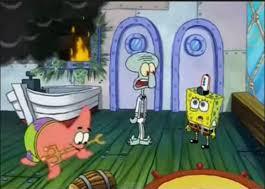 Behold, the greatest and finest eating establishment of the sea.

Squidward meets his rival Squilliam again, and to show him off, he lies about running a fancy restaurant. Now he has to get SpongeBob and Mr. Krabs to help him cover up his lie by turning the Krusty Krab into a high-class eatery, but will it all go according to plan?

Reg: I think you'd be more comfortable over at that wiki.
SpongeBob: Weenie Tropes Jr.'s?!