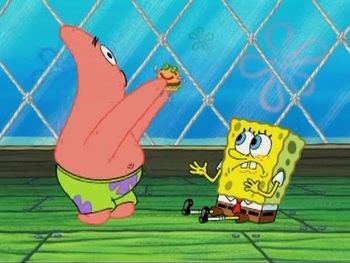 SpongeBob buys a Krabby Kiddie Meal with Patrick, and Mr. Krabs gives them both a toy, in which they have to share. When this all doesn't go as expected, they end up having a non stop fight about it.

"Yours, Mine and Mine" contains examples of:

Mr. Krabs takes SpongeBob to a cheapskate convention to prove how miserly Mr. Krabs truly is in front of the rest of the other crabs.