Squidward exits his house, saying "Another beautiful Sunday". He goes down the street, dancing, but steps on some gum and falls. He quicky tries to get it loose. He finally does, and tosses the gum aside. Officer John sees the gum and inspects it. He walks over to Squidward, thinking he littered, and asks Squidward about the gum, to which Squidward replies, "I just stepped in it." Officer John says "Boy, you sure did", and gives him a ticket, punishing him with community service.

It then cuts to Squidward picking up trash, then Squilliam comes along and boasts about the statue that was built of him for cleaning up Bikini Bottom in a week, Squidward then replies, "I can clean it up in one day!". Squilliam then gets out a tissue and blows his nose on it, and says "Here, this should get you started.", and drops it on the ground. Officer John comes along, sees the tissue, and thinks Squidward dropped it. He then gives Squidward another ticket.

When Squidward looks for place to put his trash, he sees that all the cans and dumpsters are full, so he "borrows" a kid's toy wagon. Mabel sees Squidward with the trash and she tells everyone it's Trash Day, soon the trash in the wagon becomes a trash mountain. SpongeBob comes out of one of the garbage bags and offers to help Squidward when he discovers the life cycle of a Krabby Patty (one that was thrown out). Squidward says "He'd rather be beaten to a pulp", then the boy and his mother appear, with the boy telling his mother to beat Squidward to a pulp. Squidward is beaten and covered in trash. Officer John thinks Squidward made the mess and gives him another ticket. Squidward then accepts SpongeBob's offer and SpongeBob gets rid of all the trash.

Squidward goes home and relaxes, until he realizes his house is made of garbage. He runs outside and sees that the garbage was made into a replica of Squidward's house. Officer John gives Squidward two tickets (one for the garbage house and one for the first ticket falling on the ground). Squidward gets so angry, his nerves spell out "I am angry". SpongeBob asks why and Squidward finds out his house is on top of the replica because the dump is closed. SpongeBob took it to his house by sucking the garbage onto his body. When SpongeBob talked, garbage came out of his mouth, leading Officer John to give Squidward another ticket.

Squidward puts SpongeBob (trash-filled) in his trash can. The Officer then gives Squidward another ticket for putting his trash in someone else's property. SpongeBob finds that the reason why Squidward wants to get rid of the trash is to get a statue of himself. SpongeBob makes a statue of Squidward made of the garbage. Squilliam says the statue is just like Squidward, having the stench of failure. The horrible stench melts Squilliam's statue, ruining it, and Squilliam surprisingly gets a ticket from Officer John. Before the end of the episode, Officer John gives both SpongeBob and Squidward get tickets for the statue made of garbage. 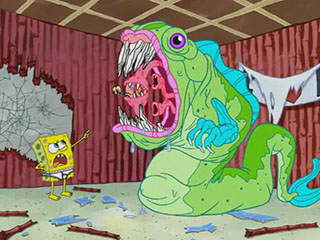 There's Kafka Komedy and then there's just... this.

The episode starts with SpongeBob feeding Gary. He accidentally drops the food and chaos comes. Then, SpongeBob goes to work. Gary tries to come with him but SpongeBob can't bring pets to work and leaves Gary. Gary then turns on the TV and watches a cowboy show. At the Krusty Krab, a customer comes in with his pet worm. SpongeBob explains that people can't bring their pets. The man is just about to leave when Mr. Krabs arrives and tells him to buy Krabby Patties. He says to the man that he is a responsible pet owner.

Then, SpongeBob feels that Gary is lonely after what Mr Krabs says, and buys another pet. He spots a stand with ridiculously cute bloated creatures. SpongeBob sees a cute green one with purple eyes, huge pink lips and blue fins He says he wants that one, however the old peddler woman who owns them tells him that the creatures are violent and dangerous around other animals, especially snails. Naturally SpongeBob ignores her and takes it home anyway while lady says to herself that the people never listen. When he gets home Gary is watching TV. SpongeBob gets in front of the screen to show Gary his new friend, then leaves to make enchiladas. While in the kitchen, Gary is chewing his toy in front of Puffy. Puffy then growls and scares Gary to go behind the couch while Puffy chews his toy apart. Puffy, about to bite Gary, sees that SpongeBob is coming back and turns himself back to a nice Nudibranch. SpongeBob gets Gary's bowl and makes a slash on it with marker. On the other side of the slash, he writes "Puffy Fluffy". Gary starts to eat when Puffy Fluffy growls at him again. Then Puffy eat every single piece of food in the bowl. SpongeBob sees that Gary is hiding from Puffy again. Gary then jumps on SpongeBob while Puffy looks like he has absolutely no idea why Gary's on SpongeBob. Spongebob tells Gary he is going to sleep with Puffy Fluffy tonight. When he puts Gary in the bed, he hisses at Puffy. During the night Gary wakes up and sees Puffy's skin on the bed. He walks in the kitchen to see a huge eel eating in the refrigerator. The eel is revealed to be Puffy Fluffy! He seems to now have five tongues with a mouth on each.

The next morning, SpongeBob wakes up and he sees a mess in his library. Cut to Puffy attacking Gary. SpongeBob then bangs the door open. Gary is relieved when SpongeBob enters the kitchen, only to be shocked when instead of helping him, his owner starts berating him for how he's still treating Puffy, even when the eel is clearly about to eat him. Puffy uses its tongues and grabs onto Spongebob, who's still berating his snail even as he's about to be eaten. It's up to Gary to save his master. Using a leash he whips at Puffy, driving it from the Pineapple home. SpongeBob chases after the beast crying for it not to go, then turning and ungratefully scolding Gary for chasing Puffy away, to which Gary gives a ruthless glare. In the end, SpongeBob brings Gary to work the next day so he's not lonely, where Mr. Krabs puts Gary to work waiting on tables.

A Pal For Gary contains examples of (YMMV goes here.):