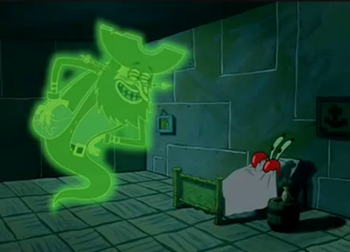 Mr. Krabs is near death after eating a spoiled Krabby Patty that he tried to serve out of petty greed, but after an experience with the Flying Dutchman, he changes his ways... 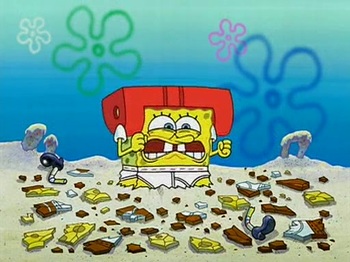 "Ooh, that's gotta hurt!"note Do it again! I wasn't looking!
I Had an Accident

After experiencing a sandboarding accident and a near miss at living with "the iron butt", SpongeBob becomes afraid to go outside, while Sandy and Patrick try to show him the fun of the great outdoors.

I Had An Accident contains examples of:

Mr. Krabs comes up with a rather poor alias to fool the Flying Dutchman.

Mr. Krabs comes up with a rather poor alias to fool the Flying Dutchman.