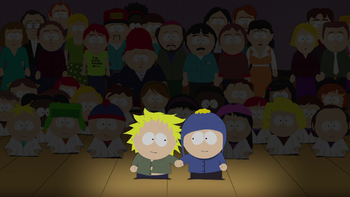 Tweek is panicking over the threat of nuclear attack from North Korea. Craig suggests he send a gift of cupcakes to Kim Jong-un instead of uselessly fretting. The gesture actually seems to charm the dictator... until President Garrison starts goading North Korea over Twitter with threats and insults that explicitly mention Tweek. He reacts as you'd expect, and Craig's attempts to calm him down only upset him further.

Meanwhile, Cartman wants attention after his threats of suicide are met with laughter, but the PC Principal refuses to allow him a Suicide Prevention shindig when it's already Distracted Driving Awareness week. Indeed, drivers are already being distracted by Garrison's tweets, to horrific results. When Cartman tries to preempt a memorial service for the slain students, Heidi tells him not to interrupt the others' grief. This inspires Craig, who is finally able to help Tweek work through his panic and plan a course of action.

They stage a motivational number about the dangers of using one's phone while behind... the desk of the Oval Office. At the end, our troubled Official Couple smile and hold hands — only to be cut off by Cartman dramatically announcing that he's decided not to commit suicide after all.