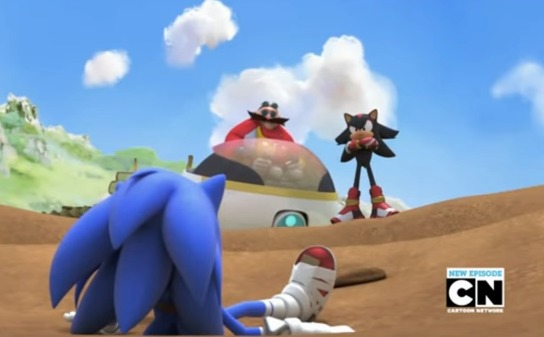 "...So, in order to increase ratings and ensure a second season, we decided to kill off the main character..."

Figuring that multiple evil masterminds are better than one, Eggman calls for a meeting of the series's stock villains, intent on drafting and executing a plan to finally defeat Sonic and his pals. Dave the Intern, T.W. Barker and his two circus bears, the Lightning Bolt Society, and Charlie the mad archaeologist are all in attendance, but Eggman seems to be preoccupied on one particular latecomer. Meanwhile, Sonic and his pals unpackage a ready-to-build bookcase for Amy.

The meeting proceeds drolly as Eggman serves his guests up some fine cheeses and bemoans the lack of quality crackers in his lair. Then, none other than Shadow the Hedgehog arrives. Eggman is absolutely ecstatic, being a massive fanboy of the famed secondary antagonist. Back at Amy's, our heroes strive valiantly to assemble the bookcase, but are thoroughly befuddled by its instructions.

Eggman's meeting of the minds begins to break down as its participants argue over who ought to lead the group. In an attempt to get the unruly gaggle to refocus on its main goal, Eggman decides that's it's time for everyone to engage in team-building exercises. First is the classic "trust fall" (in which one foul rogue falls into the waiting arms of another scumbag). This goes well until Shadow makes absolutely no attempt to catch Eggman, who tumbles onto the floor. Shortly after Eggman moves onto an improvisational acting exercise, Shadow decides he's had enough of Eggman's brand of lighter, softer villainy and teleports away. Sonic and compadres continue to have similar back luck, having jumbled the components, nuts and bolts of the ever-confounding bookcase. Knuckles ends up breaking a shelf and Sonic decides they should just exchange the bookshelf for another one.

Despite having been written off by Shadow, the other villains decide to throw their support to Eggman. Following a brief training montage, they launch their concerted attack on town just as Sonic and his group finish half-assing another bookcase. Being attacked on multiple fronts, Sonic and his friends are soon divided and struggle to hold their own against their opponents. Just as Sonic begins to turn the tide in his favor, Shadow reappears and begins viciously striking at his blue doppelganger, disgusted to the point of violence both by Eggman's general incompetence and by Sonic's shoddy bookcase craftsmanship. Despite being both verbally and physically assaulted by Shadow, Eggman is still overjoyed to be in his idol's mere presence.

Sonic and Shadow are at a rough parity for a little while, but soon Shadow exploits his Chaos powers to uppercut Sonic into the air and then slam him three feet into the dirt. Euphoric that his adversary is seemingly down for good, Eggman takes a celebratory selfie with Shadow, who begrudgingly allows his biggest fan this one favor. The camera's flash temporarily blinds Shadow, and Sonic takes the opportunity to quickly knock the stuffing out of him. Concluding that he can't possibly defeat Sonic with dolts like Eggman hanging around, Shadow teleports away, but not before promising Sonic that they will fight again, but on Shadow's terms. Elsewhere, the other heroes seize the upper hand against Eggman's allies.

Team Sonic reconvenes and conclude that, if nothing else, they're pretty good fighters. Eggman tries to weasel out of his karmic retribution, but Sonic and Co. catch him and begin lobbing him and his Egg Mobile around like a beach ball. In the foreground, Orbot and Cubot speculate on the further exciting adventures that lie in wait for the Sonic Boom cast. Just to be on the safe side, however, Cubot suggests they start an Internet petition to lobby for more episodes. So endeth Season 1 of the Sonic Boom cartoon show.