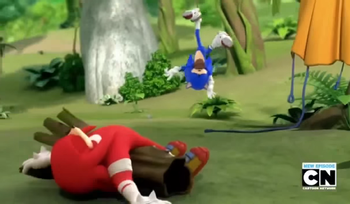 Is this surviving? Something tells me this isn't surviving.

Our intrepid heroine Amy Rose is off to Hidden Meadows in order to collect some gum tree berries, through what is implied to be some incredibly dangerous wilderness. Sticks is concerned for her friend's safety and offers to teach her some outdoor survival skills, to which Sonic scoffs that he is much more qualified to instruct Amy on such matters. Amy ends up making a bet with Sonic: She and Sticks will race Sonic and Knuckles to Hidden Meadows, and the losers will have to clean the winners' laundry for a month.

Sticks preps Amy as best she can, and, slowly but surely, Amy becomes a more capable outdoorswoman, even if she still has a tendency to accidently set things on fire. Meanwhile, Sonic and Knuckles do nothing but stuff their faces at Meh Burger until the footrace begins. By the end of the first day, Amy and Sticks have kept on schedule and have successfully foraged for food and set up camp. On the other hand, Sonic ends up setting his shoes ablaze and he and Knuckles fail to find anything edible in the woods. Unwilling to give in despite their increasingly apparent lack of survival skills, Sonic and Knuckles decide to just follow Amy and Sticks and surge ahead to the finish line at the last minute in order to win the bet. Even this dubious plot is derailed when the two decide to spend the night running around blindfolded and wake up the next morning with no idea where they are.

Amy and Sticks, being the good sports that they are, agree to lead Sonic and Knuckles back to civilization. Amy wonders out loud where the missile will end up landing, and Sticks assures her that she's sent it back to its maker. Cut to Eggman monologuing mere seconds before impact. Eggman's base is destroyed yet again, but on the bright side Mike Pollock had earned his paycheck for this episode at the last minute.