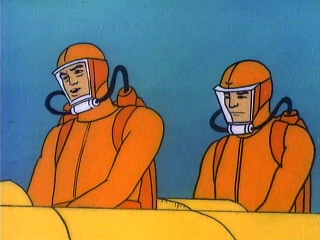 Murphy and Stormy being serious for once.

The only 'serious' episode of Sealab 2021 and based on an episode from the parent series Sealab 2020 (with some cuts due to time), a nuclear submarine named the Aquarius crashes into Seamount. This causes two dangerous events to happen: an oil spill and the nuclear reactor threatening to go critical, both threatening the sea life.

Captain Glenn, however, doesn't want to accept Murphy's help because he still resents Murphy giving him a bad report for prematurely abandoning ship. Murphy overrides him and helps him come up with a solution to get the reactor to cool down: create a hole under the reactor and tunnel in.

Glenn gives the order to abandon ship but stays behind to try to cut through the reactor room door, knowing that if he does so he'll have to insert the carbon rods by hand and receive a fatal dose of radiation. Murphy tries to talk Glenn out of it while Quinn and Stormy cut through the bottom.

Luckily, they make it through before Glenn does and cool down the reactor with coolant.

With the oil spill contained and the reactor back to normal, repairs are finished on the Aquarius and Glenn thanks Murphy for his help.

The Stinger: The Aquarius runs into Sealab and both blow up.