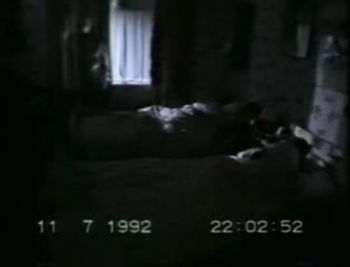 "We don't want to give anybody sleepless nights."
— Michael Parkinson
Advertisement:

Ghostwatch is a Halloween Mockumentary aired on October 31st, 1992 telling the story of the fictional haunting of a house in Foxhill Drive, London. It was staged as a live recording of an attempt to experience the supernatural events in the house, hosted by Michael Parkinson and psychologist Dr. Pascoe. Pamela Early and her daughters Suzanne and Kim are tormented by the ghost "Mr. Pipes", who bangs on the house's pipes, and has done just about every entry in the Haunted Index. Other celebrities co-hosting the show are Sarah Greene who is to venture into the house, her husband Mike Smith who is handling the studio phones, and comedian Craig Charles is on the ground interviewing Foxhill Drive's locals. Parkinson encourages viewers to call in and share their own ghost stories.

An early incident occurs in the show when viewers point out that Pipes can be viewed in the girls' bedroom during pre-recorded footage, but the hosts can't see him. The studio also receives increasing phone calls claiming weird things are going on across the country. Sarah ventures into the Earlys' house with her cameraman Chris Miller and sound operator Mike Aiton. Kim explains Pipes lives in the Glory Hole, which Pamela has kept locked for good reasons. Dr. Pascoe shows Parkinson that Suzanne has showed signs of Demonic Possession, has bent spoons, and made clocks stop. Parkinson interviews American physicist Emilio Sylvestri, who dismisses the haunting, angering Pascoe.

Craig Charles speaks with the neighbours, learning many freaky things have been occurring for years, including missing children and a mutilated pregnant dog was found. He also speaks with the man who tried to exorcise the house, but failed. Weird things begin happening in the house including a wet spot without a source, banging on the pipes, and a Cat Scare. The whole thing appears to be exposed as fake when Suzanne is spotted making noises. Later, Suzanne falls into a comatose state, develops scratches all over her body, and speaks with a deep voice. Sarah's crew investigate the bathroom, thinking they saw someone behind the door.

The studio begins to learn about Pipes' backstory through anonymous calls. A woman recalls the legend of Mother Seddons, a Victorian baby farmer who often abused and murdered those in her care. Pipes' probation officer identifies him as Raymond Turnstall, a disturbed pedophile who lived with his aunt and uncle in the house, and believed he was possessed by Seddons, wearing women's clothing. He hung himself in the basement, and his body was devoured by the family cats. Suzanne continues to act possessed, and Kim hides in the kitchen, claiming that Pipes "wants to see everyone". Suzanne then vanishes, and can be heard from within the Glory Hole. The crew open the door, only for a mirror to collapse and injures Aiton. The footage suddenly changes, showing the house has returned to normal.

Pascoe later realises something is not right, and the footage is from earlier in the night. She realises Pipes planned this, creating a nationwide seance circle which will allow him to infect the viewers at home. The live feed returns, showing Pamela, Kim, and the injured Aiton being evacuated. Inside, Sarah goes to rescue Suzanne from the Glory Hole, but the door slams behind her. In the studio, all hell breaks loose as Pipes appears, knocking out the lights. Pascoe and the rest of the show's crew flees the studio in fear, while Parkinson wanders about trying to remain calm, but is slowly possessed by Pipes and the cats.

Comparable to the US The War of the Worlds broadcast, Ghostwatch led to its own series of rash sightings and slight panics in England — the British Medical Journal reported that it had actually induced brief anxiety reaction

in at least two children, the symptoms of which were compared to those associated with posttraumatic stress disorder. A major factor in this response was the verisimilitude of the show's presentation; despite taking place during a drama slot, much of the cast was made up of well-known TV personalities playing themselves. Consequently, the show was subject to varying levels of censure, both internally and externally. It was attacked by the print media, who accused the BBC of irresponsible hoaxing. A married couple successfully filed for judicial review of then Media Watchdog the Broadcasting Standards Commission, after the latter refused to hear their complaint (along with several others) alleging a link between the show and the suicide of their teenage son. The BSC in turn reversed its position and ruled that the broadcast was "a deliberate attempt to cultivate a sense of menace" and that more active efforts should have been made to clarify that it was not a genuine live show.

to voice their anger, while the BBC itself never made a repeat broadcast despite the obvious mileage available in terms of ratings, and supposedly withdrew its BAFTA nomination. In response, the creators pointed out that the broadcast had never been billed as anything other than fiction, that writing credits given both at the beginning and end of the show made this all the more clear and that they couldn't fairly be expected to flash regular disclaimers throughout the film for the same reason any other mockumentary writer wouldn't do so — that is, it would ruin the flow of the story.

The fact that the show contained some admittedly ropey acting and content warranting only a '12' certificate rating speaks volumes to the effective use of build-up and the power of suggestion employed by the writing.

, in which it turned out that the girls were making it all up to get media attention. note  In adulthood, one of the witnesses claimed "two percent" of the phenomena to have been faked; an element alluded to here

(Years later, New Line Cinema would end up adapting a fictionalized version of these same events in The Conjuring franchise.)

"31-10", a short-story sequel to Ghostwatch by the show's writer, Stephen Volk, can be downloaded from his home page

This broadcast contains examples of: