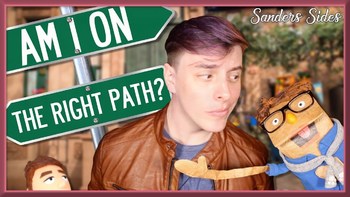 Thomas has just seen a friend he hadn't seen for a while. When he asked him what he did for a living, Thomas answered that he was a YouTuber. Then his friend asked him the dreaded question, "What do you actually do for a living?" This time, it has stuck with him and since then Thomas doesn't feel fulfilled with anything he's created, and he doesn't know why, because he's doing nothing different. In order to help Thomas find a way to discover why he's feeling like that, he musn't look for an answer, but for the question he must ask himself to find that answer, which is unknown to him. As this is like "fundamental learning", Patton suggest that they must use one of the fundamental learning methods Thomas used as a child: puppets. So the Sides transform into puppets to help him find "the question".