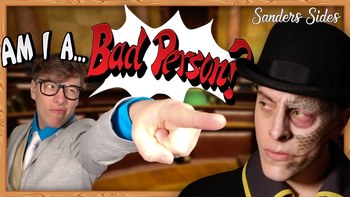 Thomas gets a once-in-a-lifetime opportunity when he gets a callback for a movie. Unfortunately, the callback falls on the same date as his friends Lee and Mary Lee's wedding — and Thomas already promised he would go. Thomas considers lying and saying he has a family emergency so he can go to the callback instead, which Patton and Virgil are both vehemently against. When Thomas says he didn't really mean that, Deceit decides to put that to the test by bringing everyone into a courtroom for "the trial of Thomas Sanders vs. Thomas Sanders." With Deceit as the prosecution, Patton as the defense, Roman as the judge, and Virgil as the jury, Deceit poses the question: is Thomas a bad person?