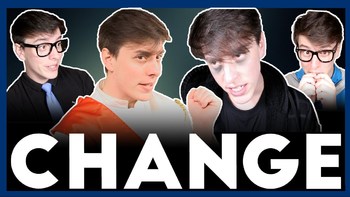 Thomas is unsettled because of all the changes that have been happening lately in his life. So much so that the first thing he does in the video is reversing the change that happened at the end of the last episode, leaving the Mind Palace Roman and Patton had created, and returning to his own apartment for his conversations with the Sides. It is soon that Anxiety points out that he feels that way because he spends too much time away from his friends, and Anxiety needs them to have constancy. At Roman's suggestion, the Sides use their shapeshifting powers to change into Thomas' friends' appearance. Logan changes into Joan's shape, Patton into Terrence's and Roman into Valerie's. Anxiety doesn't want to participate, but Thomas forcefully changes him into Talyn's face. Still Thomas feels something's not completely right about them, so the Sides try rotating shapes to see if they can find one that can work for Thomas.