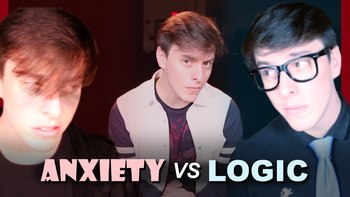 Thomas has just returned from an audition, and he bombed it. He forgot the lyrics of the song he was supposed to sing. So he returns home with his hopes pretty low. Roman, as Thomas' ego, is totally bruised after the performance he gave and Dad is busy taking care of Roman, so he only can count on Logan to help him. When Anxiety pops up and starts torturing Thomas about how bad he did it, Logan identifies that Anxiety is instilling cognitive distortions into Thomas. Logan decides that the best way to get rid of these exageratively negative interpretations of reality is to sustain a formal debate in the Mind Palace with Anxiety, to identify these cognitive distortions and teach Thomas ways of toning down his negative thinking.