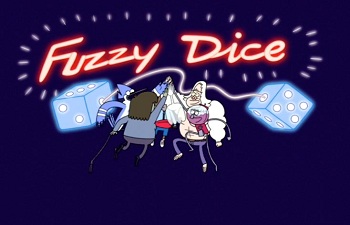 It's Pops' birthday, and all he wants are some fuzzy dice. Mordecai, Rigby, Muscle Man, Benson, and Skips decide to get the fuzzy dice from The Fun Fun Zone, a pizzeria/arcade where a band of animatronic criminals (posing as the house band) are hiding out so they can take the dice for themselves (as they have diamonds in them).