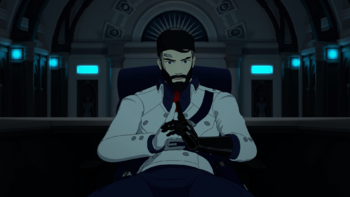 "This has always been about Mantle, hasn't it?"
Written by Kiersi Burkhart and Miles Luna
Directed by Connor Pickens
"You don't like me, I don't like you. So, how about we just part ways, and you never have to see me again..."
— Emerald Sustrai

As the fog of war covers the kingdom, Atlas nears its breaking point.

"I hope you live up to the title I gave you."