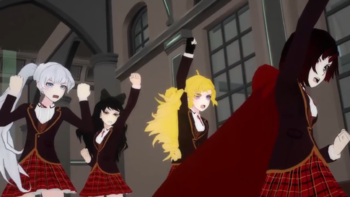 Hands up for all those who want an awesome food fight instead.
Written by Miles Luna, Monty Oum & Kerry Shawcross
Directed by Monty Oum & Kerry Shawcross
"Look, guys, it's been a good two weeks and, between more exchange students arriving and the tournament at the end of the year, our second semester's going to be great — but classes start back up tomorrow. Which is why I've taken the time to schedule a series of wonderful events for us today!"
— Ruby Rose

The first episode of the new volume kicks off with a splash as Teams RWBY and JNPR take over the hall for a food fight.