Meowth: It looks like Mimikyu hates Pikachu!
Jessie and James: HATES?!
Meowth: Mimikyu doesn't look like Pikachu because it wants to. It seems to me there's a whole lot of resentment going on, and it's not cool.
—Team Rocket, after Mimikyu agrees to help them against Ash's Pikachu 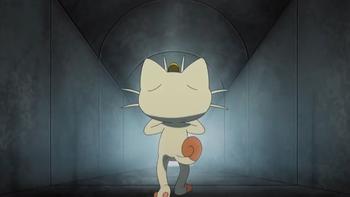 No, Meowth! Don't Go into the Light!

Team Rocket arrives in Alola, and immediately set out to catch native Pokémon. But when they find Mimikyu, what they discover is the potential for mortal danger. What will happen when, by chance, they end up in a run-in with the Alola twerps?