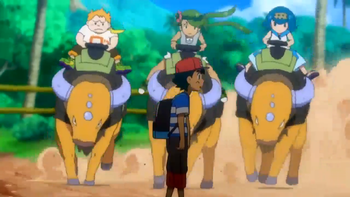 And thus, Ash's Pokémon journey came to an abrupt end.

When the Ketchum family wins a trip to Alola, Ash and Pikachu discover the existence of a Pokémon School that is home to Professor Kukui. He is also intrigued by the presence of the local island's Guardian Deity Pokémon, who sees something special in Ash.