"This is no time to be amazed! I must record this!"
—RotomDex 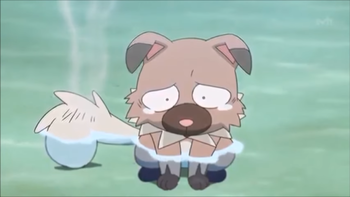 When Rockruff shows up back at Professor Kukui's lab injured, Professor Kukui and Ash investigate to see what's keeping Rockruff up at night. They discover a fighting group of wild Pokémon, and find that Rockruff has a grudge with a Magmar. Can Ash teach Rockruff to master one of its signature moves?