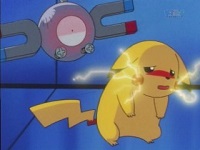 Uhh, how about we just be friends, ok?

As our heroes make their way through the industrial town of Gringy City, Pikachu, perhaps weary from travel, is in a strange state; the electric sacks on his cheeks are continually twitching as though overcharged. At the town's Pokémon Center, Joy diagnoses Pikachu as being in the first stages of a Pokémon cold. She begins treatment immediately, but the town suddenly goes into a blackout. Assuming the problem to be in the power-generating station near the beach, Ash and friends go to investigate. There they discover the Pokémon, Magnemite and a pack of Grimer—Pokémon created from sludge. What exactly is going on?