DON'T CONGRATULATE ME!
—Misty, after the Narrator congratuates her for catching a Psyduck 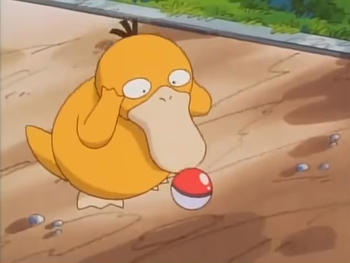 Psyduck is being caught by Misty whether she likes it or not.

A clash of issues is affecting Hop-Hop-Hop Town. The children have all gone missing, and the Pokémon are falling asleep at the Pokémon Center without getting better. Officer Jenny and Nurse Joy both have their hands full, so the twerps—and, on their own, Team Rocket—try to track down the sources of both issues. And then there's the issue of the Psyduck with the constant headache...