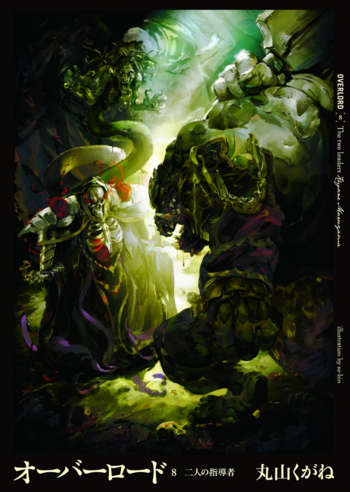 The Two Leaders
Enri Emmot, who was once saved by Ainz Ooal Gown and Pharmacist Nfirea are living in Carne Village guarded by the goblins without any incidents yet there was a new threat approaching due to the upset of balance in the forest by the absence of the Wise King of the Forest - "Enri's upheaval and hectic days."

From normal maids to the Guardians, Ainz leads the servants with absolute fidelity. He suggests certain things to some Guardians including Mare Bello Fiore. The hard days for the ruler of Nazarick - "A day of Nazarick."

SIDE STORY 1: In the morning, Enri prepares breakfast for herself, Nemu, Nfirea, Lizzie and the Goblin Troop. Nemu and the Goblin Troop are supporting Nfirea's love, yet there is hardly any progress with their relationship due to Nfirea's timid personality, Enri's insensitive behavior, and useless advice from the goblins. Using both herbs and unknown materials from Nazarick, Nfirea and Lizzie succeed in developing the purple potion.

Since the attack from the knights, many things have changed in the Carne Village. The villagers decided to protect themselves, and have accepted goblins as villagers, as they were strong enough and helped with risky work without complaint. Also, a beautiful maid of Ainz Ooal Gown visited with stone golems, helping the construction of the new wall.

Meanwhile, Enri finished her farming for the morning with one of the goblins (named Paipo) and prepared to return home for lunch. At that time, a goblin rider (Kyumei) came and warned something strange was happening in the forest. However, as there is a rare herb that can only be collected during the short season, Enri wants to go deeper in the forest.

So one day, Enri, Nfirea and all of the goblins explore the Great Forest of Tob, searching for both herbs and information about the forest. Luckily, Enri and Nfirea find a new colony of rare herbs. During their work, they find a Barghest chasing a goblin child. Enri decides to help him. Enri commands the goblins to slay the Barghest with minimal loss. From Agu, they heard the details about the sudden change in the forest: The Building of Ruin suddenly appeared in the North, and the Beast of the South vanished for some unknown reason. Thus the Giant of the East and Demon Snake of the West decided to ally and fight against the King of the Ruin together and they are forcing the other inhabitants of the forest to become their army. So they decided to prepare for the possible battle against them.

During the night, the goblins go into the forest to gather more information and save some goblins from Agu's tribe and also capture five ogres alive. The ogres suggest that they can fight with the Goblin Troop if they can give them enough food. Enri uses the 'command' again and succeeds in gaining recognition from the ogres.

To inform the Adventurer's Guild about the incident of the forest and sell the herbs, Enri visits E-Rantel. Enri gets into trouble due to the Horn of the Goblin General, she got from Ainz, as the magic caster of the gate noticed the huge power of the horn. Right before the detention, Momon intervenes and vouches for her. With help from Momon, Enri was able to successfully visit the Adventurer's Guild and explain the situation in the forest. At first, the receptionist doesn't show much interest, but after some time, she desperately asks the details about the situation (Explained in Story 2). After the return from E-Rantel, Enri is proposed to become the head of Carne Village. Initially, Enri doesn't approve of the proposal, but she gets advice from Lupusregina and Nfirea and decides to become the head.

A few days later, monsters from the forest attack Carne Village. At the gate, the goblins and vigilance committee fight against them, yet another troll attacks the backside of the town. Enri and Nfirea discover a troll on their way back from the shelter for non-combatant, and Enri decides to earn time till the battle of the gate ends. At first they succeed in confusing the troll by disguising their smell, yet eventually, the troll notices the trick and chases them. Preparing for death, Nfirea confesses his love to Enri and solely fights against the troll, so that she can run for help. And just before he was about to die, Lupusregina appears and saves his life. At the same time, the battle of the gate also culminates in a victory. Nfirea and Enri become lovers after the fight was over.

In the Epilogue, Nfirea, Enri, and Nemu are invited to Nazarick to celebrate the success of developing the new potion. Ainz requests Nfirea not to announce the existence of the purple potion, and after that, they enjoy a luxurious dinner.

SIDE STORY 2: The Prologue starts off with Ainz's bathing using a slime. Ainz decides to suggest all the male Floor Guardians enjoy the spa in the 9th Floor together.

After that, the story first focuses on the daily lives of the forty-one Homunculus Maids. Ainz created a new system where the maids are split every day into two groups, 30 for day shift, 10 for a night shift, and the other maid that is left out gets to take the day off. Initially the maids refused the one daybreak, however, Ainz managed to convince them in the end by promising that if they accept the break, the maid that took the break gets to service Ainz for the whole next day.

That time, Shaltear, Albedo, and Aura were on their day off; they later visited the small village on the 6th Floor and meet Sous-chef there.

The story then moves to Mare. He gets a secret message from Demiurge's servant. Apparently, Demiurge specifically instructed his servant to only give the message to Mare, not Aura. Being curious, Mare reads the message and sees that it is an invitation from Ainz to all the male Guardians to join him for a bath. The recipients of the message were Demiurge, Mare, and Cocytus. Seeing this, Mare understands that he needed to pass it onto Cocytus. To keep the content secret, he lies to Aura about the reason why he needed to go to the 5th Floor and heads out to search for Cocytus, only to find that he isn't in Nazarick but at the Lizardmen's village.

Due to the incident with Shalltear, Floor Guardians were forbidden to independently leave Nazarick without Ainz's permission, unless they take more than 5 level 75 servants along with them. If Mare mobilized his high-level servants, Aura will definitely notice. As such, Mare ended up heading to the Great Library of Nazarick in order to try to borrow high-level bodyguards from Titus. After reaching the Lizardmen's village, Mare finds huge constructions are currently taking place, and the modified versions of Zaryusu's fish farm are also being built. However, Cocytus isn't in the village, as he went out to subjugate the Toadmen in the northern part of the lake.

In the meantime, Ainz is practicing various different poses and speaking phrases inside his bedroom. After one hour of practice, Ainz leaves his room and headed to his office. Albedo, a maid, and Mare were waiting for him on the inside. Curious as to why Mare is here, Ainz asks and Mare responds by handing back the invitation that Ainz wrote. A few more verbal exchanges took place, and Ainz ends up by expressing his love for the NPCs and that all of them are his treasure. Hearing what Ainz said, Albedo becomes unable to control her emotions and attempted to rape Ainz. After requiring the effort of Mare and several Eight-Edge Assassin to get Albedo off, Ainz punished her to 3 days of solitary confinement.

Later that day, Ainz rides Hamsuke to the Adventurer's Guild's headquarters in E-Rantel. It was initially supposed to be a quick meeting, but along the way, he chances upon seeing Enri coming to the headquarters too for a request. Curious about the reasons, Ainz asked the Guild leader for the content of Enri's request and finds that it was relating to the lords of the forest, the Troll of the East and the Naga of the West.

Back at Nazarick, Ainz asked Lupusregina why he received no reports from her despite that the situation was grave enough for Enri to come to E-Rantel. Lupusregina responds by saying that she didn't think that it was a big deal. Ainz reprimands Lupusregina of her carelessness and states that her number one priority is to ensure the safety of Nfirea, followed by Enri and Nifrea's grandmother, Lizzie Bareare.

After sending Lupusregina back to the village, Ainz decides to visit the Troll and the Naga with Aura. Along the way, Ainz casually asked for the well being of Aura, whether she is eating well and such, like that of a parent looking after his child. The conversation then shifts to Aura's future prospects, such as potential partners, to which Aura responded by saying she is still young, only around 70 years old. When they reach the lair of the Troll of the East, Ainz finds a badly destroyed forest, which implies that they tried to imitate Aura's constructions but failed. In the lair, two ogres are eating dead goblins. They attack Ainz, but naturally, Ainz doesn't get any damage. Ainz slays an ogre with just a single blow of his staff and sends another ogre to call their leader.

Among the horde, Ainz finds the Giant of the East as being bigger than the rest and having better equipment. Ainz further notices that the Demon Snake of the West is also there but was concealed using an ability. Ainz proposes negotiation to them: obey to survive. Unlike Ryuraryus, who judges Ainz as a strong enemy, Guu refuses to speak further and Ainz challenges Guu to a duel. After some meaningless attacks from Guu end, Ainz activates Despair Aura V and instantly kills all of the ogres, trolls, and Guu. Being caught by Aura, Ryuraryus watches the whole fight and proclaimed his loyalty to Ainz. Ainz plans to attack Carne Village using Ryuraryus' underlings to present the magical sword of Guu to the Village.

Back in Nazarick, Ainz consults Demiurge about the dinner that he will treat to Nfirea, Enri, and Nemu. After that, Ainz, Cocytus, Mare, and Demiurge take a bath together. Leaving Demiurge and Mare to borrow their tool for bath, Ainz and Cocytus come across the female Floor Guardians. Albedo and Shalltear wish to bathe with him, but Ainz refuses and sends them to the ladies' section. At first, Ainz has a good time in the bath, but the lion golem in the bath attacks the female guardians to restrain their ignorant behavior. So Ainz and the male Floor Guardians prepare to help them if needed, wishing a peaceful bath the next time.