Recap / Overlord Volume 7 The Invaders Of The Large Tomb 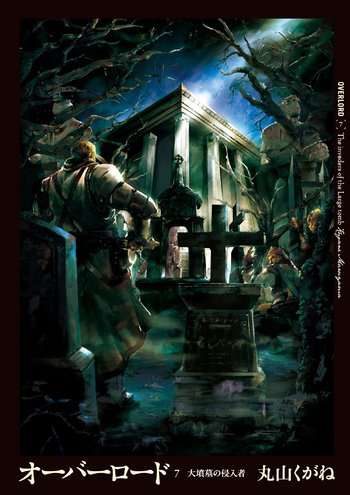 The Invaders of the Large Tomb
The next step for Ainz Ooal Gown is towards the Baharuth Empire. Connected to that, the "sacrifices" are gathered to the Large Tomb. It's impossible to escape from the nightmare-like Nazarick, could the invaders find the way to return alive?

Notice: Volume 7 does not follow the time sequence. So the paragraph of the "Past" will have P in the beginning.

Prologue: To grant honors for the operation in Re-Estize, Ainz gathers all of the custom NPCs and strong servants in the Throne Hall. From the convention, Demiurge again emphasizes their final objective: taking over the world and suggests making Nazarick an independent nation.

Main Story: Momon and Nabe stroll through the streets of Arwintar (the capital of Baharuth Empire) after their meeting with Fluder Paradyne to achieve their new objective: to demonstrate the force of Nazarick. Momon is very depressed that he should allow thieves to enter the guild headquarters, but understands that Demiurge's method is very effective and decides to follow the plan rather than reject it.

On the other hand, Hekkeran returns to their residence and finds a moneylender bothering Imina, asking Arche's location. After Roberdyck and Arche return, Hekkeran asks about the moneylender. Arche confesses that she is indebted due to the extravagance of her parents. Considering Arche's circumstances - though they deny that they are worried about Arche - Foresight decides to accept the quest from Count Femel to investigate a mysterious large tomb. Taking money in advance, Arche expects that she can get away from her home with her sisters when she finishes the quest.

Among those who are willing to explore this unknown place, four worker groups volunteered for the exploration: Dragon Hunt, Heavy Masher, Tenmu and Foresight. Count Femel provides them his best support, including special horses (Sleipnirs) and adventurers for escort. Darkness also goes with them, and Momon asks for the reasons that they volunteered. The workers answer that they volunteered for money, and they think that the reward will be worth their lives.

P. Fluder tries to dominate the legendary undead monster, expecting that success will lead him to a higher rank of magic, but he fails again. The Darkness visits Fluder, and although there was no reservation, Fluder decides to meet them since he was interested in Nabe, who was known to be a powerful magic caster.

Meanwhile, Rigrit Bers Caurau meets up with Platinum Dragon Lord to have a talk and he requests Rigrit for help in collecting some information.

The workers arrive at the tomb and they quickly find a huge amount of treasure in the four affiliated tombs. Leaving Green Leaf to scout, the rest go into the underground part of the tomb expecting a lot more treasure. At the same time, Ainz returns to the tomb, leaving Pandora's Actor as his body double. Preparing to monitor the massacre, Ainz selects Foresight as his sparring partner. Now the massacre begins.

Moreover, Green Leaf on the surface meets Pleiades, and they are forced to fight the Nazarick Old Guarders. Though this fight was a test for pursuing fleeing invaders, they were too weak and all of them are defeated without having to deploy any of the other servants.

Meanwhile, Heavy Masher becomes exhausted from the endless waves of monsters. After escaping from the deadly traps of undead, they meet seven elder liches and run away from them too. During the flight, a trap transports them. Gringham and a thief are eaten alive by cockroaches of Kyouhukou, and at least one of the members becomes a new toy for Neuronist Painkill.

At the same time, Tenmu encounters Hamsuke and a group of training lizardmen. Hamsuke challenges Erya to a duel to test its own progress as a warrior. Erya is beaten and killed by Hamsuke's martial arts.

Along the way, Foresight are also caught by a teleport trap, moving them to the Amphitheatrum. Hekkeran tries to deceive Ainz, saying that he came to Nazarick under orders from Ainz's colleague, but Ainz sees through the lie and becomes really upset. After fighting with Foresight as a warrior, Ainz decides to stop playing and reveals his true power. The other members try to buy some time to allow Arche's escape, but all of them are instantly defeated by Ainz, and Arche is killed by Shalltear shortly thereafter.

After checking that the defense system of Nazarick is working properly, Albedo suggests for Ainz to establish a secret surveillance team to search for other guild members. Ainz approves the idea. (Though it seems that Albedo's true objective is to annihilate all other guild members.)

In the end, the reasons behind the invasion is finally revealed. On Ainz's orders, Fluder lied to the Emperor that he located the tomb through his magic. The Emperor used Count Femel to investigate it and avoid the responsibility of the invasion. But as the invasion of Nazarick itself was part of Demiurge's plan, Aura and Mare visits the imperial palace with a dragon and threatens the Emperor that if he does not apologise for the invasion, then they will destroy the whole empire. The Emperor comes forward and decides to talk with them.