Recap / Overlord Volume 6 The Men In The Kingdom II 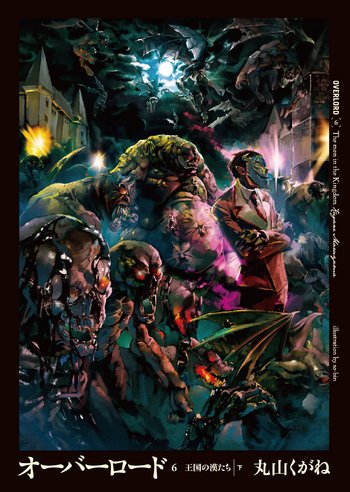 The Men in the Kingdom, Part II
The Six Arms, top-class battle squad of the underground criminal organization, Eight Fingers within the Kingdom starts to move. The adamantite class adventurer group, "Blue Rose" will fights against them. During the battle, the mysterious great demon, Jaldabaoth starts to act and flame rises in the royal capital, Re-Estize by an intense battle.

Ainz Ooal Gown (Pandora's Actor transformed into Ainz), Victim, Demiurge and Cocytus come to test whether Sebas Tian had really betrayed them. Ainz orders Sebas to kill Tuare. Hesitating for a few seconds, Sebas tries to kill her seriously, but Cocytus blocks his attack, stating that Sebas has proved his loyalty as Cocytus confirmed that Sebas's attack was a killing blow. After that, Ainz (Pandora's Actor) returns to Nazarick with Victim and the real Ainz comes over. Ainz recognizes that Tuare is the older sister of Ninya as they look similar and confirms her name. Wanting to pay Ninya his debt to her, he decides to accept her sister into Nazarick as a maid, protecting her in the name of Ainz Ooal Gown.

After the mission to gather information and move all the wheat from the storage in Re-Estize is finished, Sebas and Solution prepare to return to Nazarick. While Sebas and Solution were out to buy wheat and the servants guarding the mansion had withdrawn back to Nazarick. Eight Fingers kidnapped Tuare and left a note behind after they left, instructing Sebas to come alone to their stated venue. Sebas Tian wanted to go after them alone at first, but changes his mind and reports this to Ainz under Solution's suggestion. Enraged that they dare trample on the name of Ainz Ooal Gown, Ainz orders Albedo to send Demiurge, Pleiades and several other servants to rescue Tuare unharmed and to completely destroy Eight Fingers.

At the same time, Blue Roses, Gazef Stronoff, Brain Unglaus, Climb and other forces move to sweep up Eight Fingers. As Brain, Climb and Lockmeier were infiltrating one of the hideouts of Eight Fingers, Sebas, by chance, was also heading towards the same location. Sebas detected their presence and meets up with them as they exchange information of their respective situations. Concluding their discussion, they decided that Brain, Climb and Lockmyer would search for Tuare while Sebas goes to the arena where four of Six Arms were waiting for him. Sebas arrives there as they are ready to execute him, but kills them effortlessly in less than twenty seconds. He then leaves Solution to kidnap the audience present in the arena and goes off to search for Tuare.

Elsewhere, Brain, Climb, and Lockmeier found Tuare (Succulent in disguise using his illusion) in a cell. They then bring her along with them in their attempt to escape. Brain and Lockmyer each had their suspicion about Tuare, as they felt something was off about her. Zero suddenly appears, and blocks their exit, and fights Brain. In the midst of the fight, Brain's and Lockmeier's suspicions were confirmed as Tuare was revealed to be Succulent in disguise. Succulent fails at his attempt to kill Climb and lifts his illusion. So they begin their fight against Zero and Succulent. Climb and Lockmeier defeat Succulent and Climb gave the final blow. After that, Climb thought of joining Brain in his fight against Zero, but discarded that thought as he witnessed the unbelievable exchange of blows of the duel between Zero and Brain. As they each prepared their trump cards, Sebas Tian enters the area with a rescued Tuare. The sight of Sebas being present here unnerved Zero as did not believe Sebas when he said he had killed all his subordinates. Postponing his duel with Brain, he then focuses his full attention on Sebas and attacks him with his strongest attack. But Sebas withstood it easily with his muscles and kills a dumbstruck Zero in the next second with a heel drop kick. After bidding Climb and the rest goodbye, he carries Tuare with him and returns to Nazarick with Solution.

In another place inside Re-Estize, Mare and Entoma capture Hilma. While Mare drags Hilma to Kyouhukou for interrogation, Entoma stayed behind to finish transporting all the valuable property in Hilma's mansion while eating Hilma's guards. By coincidence, Gagaran of Blue Rose encounters Entoma as she just finished eating a human arm. Entoma suggests Gagaran to ignore her, but Gagaran refuses and they start to battle. Entoma is much stronger than Gagaran and overwhelming her, but Tia and Evileye joined in and finally defeat Entoma by the help of Evileye's insecticide spell. However, just before Entoma could be slain, a masked Jaldabaoth appears. Sensing the huge difference between their level, Evileye warns Gagaran and Tia to retreat with all haste. However, Demiurge blocks their teleportation and casts a Hellfire Wall to prevent them from escaping. Overestimating their abilities, he unintentionally got them killed due to the overwhelming effects of the wall of flame. Enraged, Evileye attacks him with her best spells, but they did not have any effect on Jaldabaoth. Realising she had no chance against him, she prepares herself for death. Momon, landing from the sky, appears in between her and Jaldabaoth.

Meanwhile, at the Baharuth Empire, Emperor Jircniv wants to know about the existence of the recent appearance of the mysterious magic caster named Ainz Ooal Gown, and wonders if they could put him under the empire's control. He then asked for help from Fluder Paradyne to collect information on the adamantite adventurer's team, Darkness, that had appeared recently in E-Rantel.

Back to the present, Demiurge then introduces himself as "Jaldabaoth" to Momon and tells Momon that he came to find an important item in the Royal Capital. After exchanging a few rapid blows with Momon, he then escapes as Momon was protecting Evileye from one of his attacks. He then casts a wide range spell called the "Flames of Gehenna" around a certain area of the city, summoning countless demons inside it. Believing Demiurge's story, almost all adventurers in Re-Estize united together to stop Jaldabaoth, and Momon becomes their hidden weapon as nobody except him can fight against Jaldabaoth. While other adventurers battle against the weak demons, Momon, Evileye, and Nabe fly across the city to strike Jaldabaoth and his group of masked maids.

In addition to that, Climb, Brain, and Lockmeier go into the area to find survivors. Most of the people have vanished, but Climb finds one group left alive. While they try to help the survivors escape, Brain encounters Shalltear Bloodfallen. As Shalltear lost her memory due to the side effect of revival, she does not remember Brain. Brain challenges her, and by using a weakened version of Gazef's skill (Fourfold Slash of Light), succeeds in cutting her fingernail. Considering it a great achievement, he begins laughing and retreats. As Shalltear tries to catch him, she discovers Climb and stops her chase.

The war between adventurers and demons becomes more and more intense. Endless demons drive the adventurers into a corner. In their moment of crisis, King Ramposa III made his appearance with the warriors under Gazef's command, then the revived Gagaran and Tia join the adventurers so they can earn some more time.

Numerous showdowns are going down: Momon against Jaldabaoth, Nabe against Lupusregina, Solution and Entoma, with Evileye against Yuri and CZ. Each pair fight their respective battles, though the former two are merely performances. During their fight, Momon and Jaldabaoth crash into a building and walk into a secured room, where Mare was waiting for them. There, Ainz hears Demiurge's explanation about the plan to make Jaldabaoth as the "Demon Lord", due to one of Ainz's previous orders. Following the plan, Momon acts as if he defeats Jaldabaoth and becomes a national hero.

In the epilogue, Hilma, whom had been tortured horribly by Kyouhukou, succumbs to torture and betrays Eight Fingers by revealing their meeting place. In the middle of the meeting, Aura and Mare break into the executive council. As they started they began to show aggressive behavior, Aura then dominates them by using her breath, effectively paralyzing them and their guards and congratulated them as they were pronounced to be puppets of Nazarick.