Recap / Overlord Volume 5 The Men In The Kingdom I 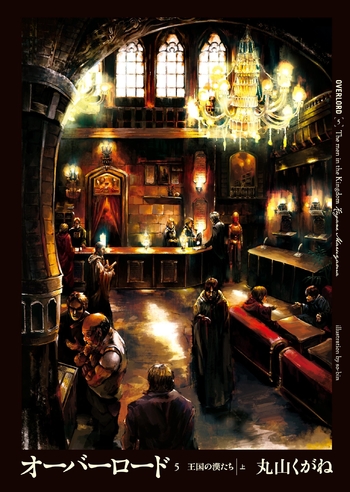 The Men in the Kingdom, Part I
Re-Estize Kingdom is being threatened by "Eight Fingers," a criminal organization which rules the underground society. Being the kind of butler who is loyal to his master, Sebas goes into the Kingdom to gather information under Ainz's command. Climb is being anxious about his weakness in spite of his loyalty to the "Golden Princess". After his humiliating defeat at the hands of Shalltear Bloodfallen, Brain returns to the royal capital no better than an empty shell. With the Kingdom as their stage, these three men together face the underground organization with their own belief!

Brain Unglaus is found on the street by Gazef Stronoff who is surprised to find such a skilled swordsman acting suicidal. Gazef wanting to keep him alive and hoping that Brain would join the kingdom offers him a place at his house. Climb was an orphan that at an early age was taken in by Princess Renner and raised to become her personal guard. Feeling indebted to her for saving him, he tries his best to become strong for her sake. Challenging Gazef to a training duel to test his strength. Climb quickly realizes that he is no match for Gazef and needs to find someway to grow stronger. He went to Renner's private room and with her is Lakyus, leader of Blue Roses discussing about Eight Fingers to Renner. Lakyus requested Climb to deliver a message to Gagaran and Evileye.

To fulfill Lakyrus's request, he heads to a local bar to meet up with two members from Blue Roses, since the Blue Roses is on friendly term with the Golden Princess, he has got to know them. After a while they start to talk about the new adamantite adventurer team that have recently appeared from nowhere. As the group is so new it still haven't gotten a name, but the members are known as Momon and Nabe. Gagaran and Evileye get into a discussion about their exploits and conclude that with only a warrior and a magic caster it is next to impossible to complete what the two have done in such a short amount of time. Blue Rose might be able to do it as well, but they would need all five of their members and even then they could probably not have done it as fast. Climb impressed by this hopes that one day he can meet this Momon and become as strong as him.

After buying some magic scrolls, Sebas walks through an alley as a shortcut. While walking by a pub a sack is thrown out of the door. The sack turns out to have a woman inside of it beaten badly and looking close to death. While thinking about what to do, the woman grabs Sebas leg and looks at him. After a man comes out from the door, he gets into an argument with Sebas saying that the woman is property, Sebas asking the woman if she wants to be saved. After getting a reply, he takes her home with him after scaring the man away.

Upon his return, he is questioned by Solution why he would take a human he found on the street back to their place. He answer that she should be useful for their cover once healed to act as a servant in their mansion, seeing as it would be strange with just him working alone for Solution in this big mansion. Solution accepting this decides to heal the woman and by Sebas's order that she will not report this event back to Nazarick. After she is healed the woman reveals herself as Tuare having been a slave and rescued by Sebas, she gladly accepts becoming a maid and strongly imprints on him. After sometime a group of guards lead by Staffan Heivish and Succulent turns up accusing them of involving themselves with slave trafficking, and having bought Tuare as a slave. Demanding them to pay a heavy fine and turn over Tuare to their custody. Sebas quickly realizes that these people are corrupt guards working on behest of the criminal group that he saved Tuare from. After getting the guards to leave without a fight, Solution says that they should simply turn Tuare over and wash their hands off this since it is only detrimental against their mission. Sebas on the other hand decides to go out and crush this criminal group to prevent any further trouble. After he leaves, Solution finally decides to contact Ainz, informing him that Sebas might have gone rogue.

Meanwhile, Sebas notices that someone is following him and finds a boy being beaten up by a group of men. Sebas got into a fight with them and easily beat up the leader and scared the men away. Climb watching the whole fight is impressed by Sebas and decides to follow him. Brain also decides to follow Sebas to hopefully learn more about him. Climb rushes up in front of Sebas while in an alley and surprises Sebas when he asks him to teach him how to fight. Sebas impressed by the light in Climb's eyes says that he has a way to make Climb stronger, but risks losing his life if he accepts. Climb accepts and Brain watching the whole thing is surprised that Sebas would so readily accept. Sebas then unleashes his killing intent which paralyzes both Climb and Brain with fear making them unable to move, however, when he swings his fist with the intent to kill, Climb barely manages to move out of the way by overcoming his fear. Brain, shocked that Climb could move when he himself was unable to, rushes forth and asks how he could possibly do it, when someone stronger was unable to. He is then told that fighting for someone other then oneself can make a person overcome their limit. Then they are ambushed by assassins, but they're able to defeat them. They interrogate one of them and tells them, they were sent to kill Sebas by Succulent of Six Arms.

Thereafter, Sebas, Climb and Brain prepare to attack the criminal organization. Sebas raided the shop and fights his way through. He finds Stafan and beats him up to death after seeing a woman beaten badly by him. Climb eventually finds the leader of the group who turns out to be an executive of Eight Fingers named Cocco Doll, he's unhappy with the princess decree to outlaw slavery which was his main source of income. Climb fights against Succulent, but was defeated. Brain arrives and eventually defeats Succulent. After the battle, Sebas arrives and informs them that they have achieved their objective.

On the other hand, Climb returns to the palace and Renner tells Climb that Lakyus and her forces are preparing to attack the main facility of Eight Fingers. In the meantime, Zero and Six Arms find out that Succulent and Cocco Doll were captured by the authorities. Zero orders his subordinate to release Succulent and Cocco Doll from the authorities to the Count and also to find the perpetrator, who attacked their organization. At the same time, Sebas returns to the mansion and finds Solution not in her disguise, but in her full battle maid equipment promptly stating that Ainz Ooal Gown is waiting for him.