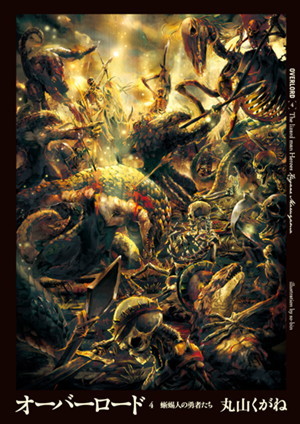 The Lizard Man Heroes
The ruthless army of death approaches the peaceful village of the Lizardmen. To protect their tribe, and to survive with their beloved ones, the Lizardmen rise. Meanwhile, the large army of undead goes to battle for the "experiment" of Ainz. Their commander is the 5th Floor Guardian, Cocytus, ruler of the frozen glacier. Witness the world ruled by stern law of the jungle.

The story begins with Zaryusu Shasha of Green Claw waking up and thinking about the lizardmens’ current situation. They are in a really bad spot, there used to be seven tribes, but because of food shortages a war between the tribes started leading to the seven tribes becoming five. The lizardmen also had to make laws about food gathering to make sure that the surviving tribes had enough food to survive. Still the lizardmen believe that the strongest should rule and survive and see's this occurrence as a natural thing in life. This morning, however is interrupted when an undead creature appears and declares that within a few days their undead army will appear and kill all the lizardmen.

Zaryusu Shasha quickly volunteers to inform the other tribes in hope that they can face this enemy together. He leaves together with his pet and friend Rororo, a four headed hydra. He first arrives at the Red Eye tribe and there meets with Crusch Lulu who is their leading figure. The two of them quickly fall in love and together they travel to the Dragon Tusk tribe, which is led by Zenberu Gugu. In order to follow Zaryusu, Zenberu wants to have a duel with him since he is the bearer of Frost Pain one of the four treasures of the lizardmen. After Zaryusu wins, Zenberu together with his tribe joins them and time is advanced to the day of battle.

Meanwhile, the captain of the Black Scripture discuss with Zesshi Zetsumei about a powerful vampire and the casualties caused by it.

In the Great Lake, Cocytus is the one who has been sent from Nazarick to destroy the lizardmen. He has at his disposal five thousand undead as well as an undead magic caster named Iguva=41 created by Ainz himself. Cocytus has been explicitly ordered to lead this army from the back, giving out orders, and that he should not appear on the battlefield. Believing that his army is more enough to defeat the lizardmen and easily win, Cocytus simply orders them to attack head on. To his shock the lizardmen turn out to be much stronger then he thought and it is clear to see that they are winning against the undead horde. In a last attempt to win Cocytus sends out Iguvua=41. After a fierce battle between the leaders of the lizardmen, Zaryusu Shasha, Crush Lulu, Zenberu Gugu and Rororo, against Iguva, the undead horde is defeated. Cocytus is surprised at his defeat and ashamed at losing an undead created by Ainz, however he is deeply impressed by the bravery show by the lizardmen while returning to Nazarick in order to receive his punishment.

Upon his return, Cocytus is scolded for his failure and is given the order to annihilate the lizardmen with a stronger army. However Cocytus asks if they could spare the lizardmen instead and make them part of Nazarick. Ainz is happy at this development since he wanted the guardians to experience a real army battle and was also impressed with the lizardmen and he also wants them to join Nazarick. So he changes his order from annihilation to occupation and that as for Cocytus punishment for his failure is to be given control and responsibility over the lizardmen once they have submitted to Nazarick.

The day after the battle the lizardmen see that a new undead army has appeared, they are surprised at how quickly a new army could be assembled and by the composition of the new army. While the undead army again seems to be composed of five thousand, this army is completely different compared to the first army. The previous army had broken and rusty weapons and armor they were also very disorderly. This new undead horde on the other hand is fully equipped with magical weapons and armor, not only that, each and every item seems to be a unique and powerful magic weapon. While one of the big kingdoms might be able to field an army fully equipped with magic weapons they would at most have weapons that were mass-produced with a simple enchantment they could never deploy an army with such diverse enchantments and with each soldier seemingly holding a powerful weapon. If that was not enough the leader of this army cast only one spell and instantly froze the entire wetland into ice.

After that, Gargantua appeared in the forest and threw a giant boulder between the two armies. The undead legion gathered close to the rock, raised their shields flatly above themselves before kneeling down. The other skeletons jumped on top of the raised shields, nimbly maintained their balance then, like the skeletons below, likewise raised their own shields. The skeletons approached the giant boulder at abnormal speed and the stairs made out of undead army units was finally completed. Following this, the other undead soldiers also began to move. These undead were even more impressive looking than the skeletons moments ago, and numbered approximately one hundred. In their hands were spears with a piece of cloth attached, like the kind used by horse-back spearmen. The crossed spears formed a single path leading directly to the large boulder. The death magic caster stepped on the path arranged by the undead, and following behind him were numerous figures who had seemingly appeared out of nowhere. Leading the path was the magic caster whose extent of true strength had reached unfathomable heights.

Seeing as the undead leader wants to parlay Zaryusu and his brother Shasuryu Shasha go forth knowing that they have no chance to win against this enemy. They are then told by Ainz that he is impressed with their previous battle and has decided that instead of destroying them, make them submit to him instead. He also informs them that he previously only sent one of his servants Cocytus to do battle against them but that he was told not to fight himself. They are then given the condition that if they can defeat Cocytus in battle, Ainz will no longer bother them, however if they lose or decide not to fight they must submit to him. Before Zaryusu leaves, he asks Ainz why he froze the lake area to which he responds that he didn't want to get mud on his shoes. Zaryusu then truly realizes that Ainz must be a powerful demon and they have no chance to win against him seeing as he would use such powerful magic that they could not even dream of using for such a reason.

With a heavy heart Zaryusu and Shasuryu returns to the lizardmen and informs them of what they have been told and seen. Knowing that they have no chance to win, but still decide that they must at least challenge this Cocytus, they pick out the most elite warriors among the lizardmen and then goes to fight against him. Arriving at site for the battle Cocytus creates two ice pillars and states that only those who cross the line created by it will be killed. A little more than fifty lizardmen warriors volunteers themselves for the fight. Cocytus activate a skill that freezes almost all lizardmen, and only the five strongest lizardmen, Zaryusu, Zenberu, Shasuryu, Kyuku Zuzu, and Sukyu Juju, are still able to fight. However they are no match for Cocytus and everyone is killed by his hands. Crush Lulu having been told not to join the battle, to stay behind and lead the lizardmen kneels before Ainz and submits to him fearing that they will now be treated as slaves. Ainz instead responds that they will be treated fairly as subjects under his rule and that he will leave Cocytus to lead them, and agrees to revive Zaryusu in exchange that she spies on the lizardmen for him.

Zaryusu wakes up, surprised to be alive as he knows that he was previously killed by Cocytus. He finds Ainz standing there with a magic item that has brought him back to life and the lizardmen kneeling around him revering him as if he was a god. The lizardmen having no god to pray to and only honoring their ancestors. Zaryusu quickly realizes that someone with power like Ainz can't be a magic caster or a demon, he must be a real god. As these thoughts circle around in his mind he collapses from exhausted for being brought back to life.