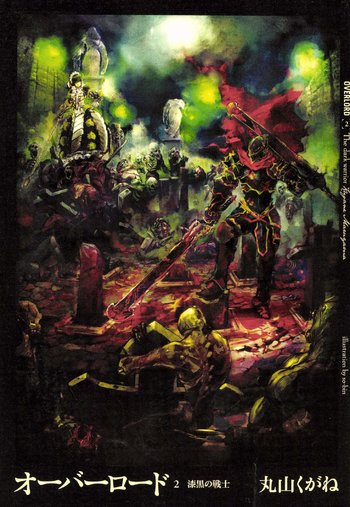 The Dark Warrior
One week after the teleportation to this unknown New World, Ainz Ooal Gown and his battle maid, Narberal Gamma, infiltrate the fortress city of E-Rantel as adventurers. Their objectives are to gather information and gain fame in E-Rantel. Being offered a request to collect medical herbs, they took to the forest where the beast named the "Wise King of the Forest" dwells. Meanwhile, the sinister influence of an evil secret order is approaching to E-Rantel. A legion of undead controlled by an evil magic caster and a ruthless warrior block the Ainz's way!

Ainz, together with Narberal Gamma, heads to E-Rantel under their aliases of Momon and Nabe while they take on their adventurer identities. Having to start out as the lowest ranking adventurers, which is copper plate, they head to an inn in order to rest up, but are pulled into a small fight. Ainz gives away one of his YGGDRASIL potions as a compensation to a female adventurer. The next day, they team up with the adventurer group called the Swords of Darkness to go on a monster extermination expedition. Before leaving, they are interrupted by Nfirea Bareare, who wishes to hire Momon as an escort to Carne Village in order to gather some herbs. His true intention for doing this is that he's trying to find out about the recipe of creating the potion that Brita brought in not too long ago, the potion which came from Ainz. Ainz accepts his request only if the Swords of Darkness can come along and Nfirea agrees.

While traveling to Carne Village, a sinister group named Zurrernorn led by Khajiit Dale Badantel, a Necromancer, is offered assistance by Clementine, a former holder of the ninth seat of the Black Scripture. They agree to work together to raise an massive undead army in the hopes of turning E-Rantel into a second undead city. To realize their scheme, they need to get a hold of Nfirea, so that they can use a very powerful magic item due to his talent that allows him to use any magic item. With him having left the city at the moment, there is no other choice but to wait for his return.

On their journey to Carne Village, Ainz's group encounter a hostile group of Goblins and Ogres. During the fight against the goblins and ogres, Ainz uses this opportunity as a way to show off his strength and raise his fame in front of the adventurers he is with. Eventually making their way to Carne Village, they are all surprised that the village is fortified with a sturdy wall. Ainz understands that the villagers have started to make defensive barricades to better protect themselves ever since their previous experience with the knights that attacked the village. Enri Emmot, using a magic item previously given to her by the great magic caster Ainz Ooal Gown, summoned the Goblin Troop who have been helping them with village security, and teaching the villagers how to defend themselves. It turns out that Enri is the childhood friend of Nfirea.

During their stay at the village, both Enri and Nfirea exchange news. Taking hints from Enri's stories of the deeds of the villager's savior, Nfirea discovers that Momon's true identity is actually the magic caster Ainz Ooal Gown. Astonished, Nfirea runs to the hill where Ainz is seen watching the villagers that are practicing their marksmanship with the bow and arrow. Upon meeting him face to face, Nfirea asks whether Momon is actually Ainz Ooal Gown. This unexpected turn of events surprises Ainz. After confirming his identity, Nfirea explains about his hidden agenda in hiring Ainz. Even though he is still confused with the turn of events, Ainz was relieved that Nfirea doesn't seem to want the recipe to do any harm. He simply brushes Nfirea's actions as simply an act of securing connections with him. Nfirea sighs in relief and gratefully thanks him for saving the villagers and the girl he loves.

The next day, they head into the forest to gather naturally grown Arnica Grass used for manufacturing potions. Still wanting to increase his fame further, Ainz lures the Wise King of the Forest into attacking them with the help of Aura. To Ainz's disappointment, the Wise King turns out to be a giant hamster, but he decides that she might still have some use and makes her submit to him. Everyone else is impressed by the majestic form of the Wise King while Ainz sees her only as being a cute hamster. He later gives her a new name, Hamsuke.

Upon their return to E-Rantel, the group splits up with Momon and Nabe heading towards the Adventurer's Guild to register Hamsuke as their pet, while Nfirea goes with the Swords of Darkness to return to the pharmacy to unload the supplies and claim their reward. When the latter arrive at the pharmacy, Khajiit and Clementine, who have both been lying in wait for Nfirea, attack them, killing the Swords of Darkness and kidnapping Nfirea. On his way to Nfirea's house, Ainz meets up with Lizzie Bareare, Nfirea's grandmother. After a little chat, Ainz accompanies Lizzie back to the pharmacy. When they arrive, they find the zombified members of the Swords of Darkness who are quickly disposed of by Ainz. Once discovering that Nfirea has been kidnapped, Ainz is hired by Lizzie to rescue him. Ainz and Narberal then set out to the cemetery, where Zurrernorn has released their undead army to attack the city.

Fighting their way through a hoard of low level undead, they eventually reach Zurrernorn's hiding place. Momon and Clementine distance themselves away from the group to start their one on one duel, while Nabe and Khajiit battle against each other. After some time, with Ainz's permission, Narberal releases her true power and kills Khajiit with her powerful seventh tier magic spell. When he was done telling Nabel to get serious, Ainz decided to finish Clementine off by bear hugging her to death in his true form. With the defeat of Zurrernorn's members and rescuing Nfirea, Ainz and Narberal are given a huge boost in fame and rapidly advance to a Mythril rank adventurers. Meanwhile, back at the inn, Ainz contacts Albedo only to find out that Shalltear Bloodfallen has rebelled against them.