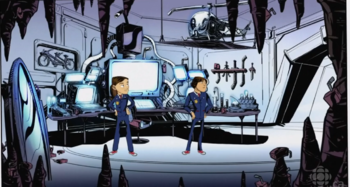 The Batcave looks quite...different.
Olive and Otto in Shmumberland
Advertisement:

When Olive and Otto get zapped into a comic book, Olive must use her knowledge of the comic book to escape.