Since 1994, EA has released many games in this racing game franchise.

Note: The era organization for these games was based on Wikipedia's once-used organization of the Need for Speed titles in the series' navbox template. They were based on the most common or significant aspects of installments in the particular eras.

Series logo in all games in this era except for the first one. 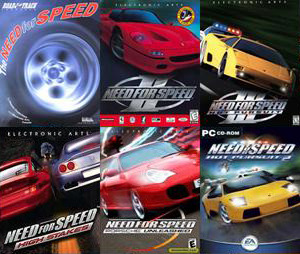 The classic days of exotics and cops.

The games in the franchise's earliest era are simply racing exotic cars in scenic locations, with the added element of police car chases (which is what the series is best known for) in most installments. EA Canada and EA Seattle made most of the games in this era, though EA Black Box made the last classic NFS game before they overhauled the series' identity. The Need for Speed logo for this era used a big, thick, metallic typeface. This era's games were later re-released together in a 2003 PC-only compilation package called The Need for Speed Collection, save for the first game of course.

Series logo that was used for all games in this era except Undercover. 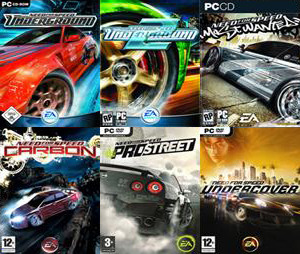 With EA Black Box taking control, the franchise focused more on the tuner car culture with a heavy focus on illegal street racing (save for ProStreet, which had organized race events), aftermarket customization, and cheesy storylines to boot. Police chases and exotic cars would not return until 2005's Most Wanted. Games in this era can be identified by the sleeker logo with the elongated tail in the letter S for Speed, except for Undercover which brought in a new typeface that's been continuously used since,note Although 2013's Rivals used a different typeface that evoked a bit of the older games' style, and the 2015 reboot has given the Undercover-introduced typeface a mostly minor update (the biggest difference being the N). as well a speedometer-styled "N" logo

◊ (which has seen varying degrees of usage and prominence since its introduction). In some regards, this era is what arcade racing game fans think of when NFS is mentioned, but some classic fans beg to differ. The first three games were also re-released in a Collector's Series bundle in 2006 for PlayStation 2 and Windows.

Series logo used from the previous era's Undercover to the 2014 film (barring Rivals). 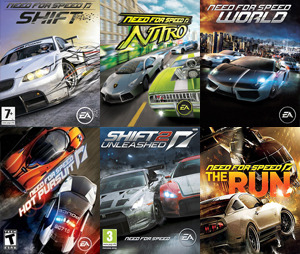 Racing gets a social identity crisis.

After the failures that were ProStreet and Undercover, EA put Black Box on the sidelines and brought in several developers to make games for the series. The series lost a consistent identity during this era, save for a new speedometer-inspired franchise logo and typeface that Undercover introduced and the debut of the Autolog networking system in 2010's Hot Pursuit. Two differently-styled NFS games were released each year in this short time period, but a few of this era's games (namely the Shift sub-series and Hot Pursuit) did help return the franchise to critical acclaim. However, as the series' YMMV page will explain, the fanbase became pretty fractured during these years.

Series logo that was used only for Rivals; Most Wanted 2012 and the 2014 film used the Undercover-introduced logo. 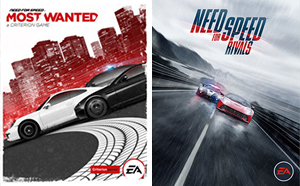 Development moves to Europe, social racing 2.0, and speeding on the silver screen.

It was clear from The Run that EA Black Box would not be taking back control of Need for Speed, and EA shifted development of the games to developers in Europe. With Autolog 2.0 by its side, the franchise seemed to have returned to its roots; racing mostly exotic cars in scenic locations with the franchise's famed police car chases. However, the two games in this very short era, a reinterpreted Most Wanted by Criterion Games and Hot Pursuit 2010 Spiritual Successor Rivals by new series developer Ghost Games, received a massive fandom backlash (mainly from those who preferred the second era's tuner-styled games). In addition, a film was released in 2014 as the only totally new Need for Speed-related thing that year (its twentieth anniversary no less), as EA and Ghost Games decided to reevaluate how they were going to handle NFS in the future.

Abbreviated NFS logo used for Need for Speed Heat and a 2021 update for No Limits. 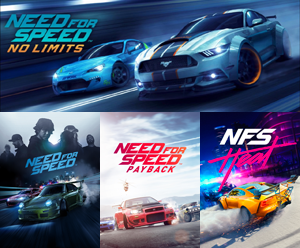 note Since No Limits is a mobile game whose app icon changes regularly, the image used to represent the game here was taken from an early official trailer's YouTube thumbnail.

Struggling to take back the pole position in The Eighth Generation of Console Video Games.

After seeing the complaints from fans of the Underground games, Most Wanted 2005 and Carbon, EA decided to look back to the games that brought them the franchise's greatest success, combining the most famous aspects of the second era games (the car customization, the fictional open-world environments, and the taking-itself-too-seriously storylines) with the continued use of the Autolog system and the franchise's legendary cop chases. Ghost Games, the main development studio of Rivals, became established as the sole developer of the console installments, and the series now receive full new installments biennially instead of yearly. Firemonkeys remain the series' mobile game developer, now focusing on an original free-to-play installment, No Limits. EA also brought back the Undercover-introduced typeface, but made some small changes; the most noticeable change being the design of the "N" in Need now looking like a capital N and Ghost Games' odd decision to drop the "N" logo. Additionally, the newest installment, Need for Speed Heat, further reduced the logo to just the franchise's famous initials, although this was apparently short-lived. Also, it seems that Ghost Games doesn't like colons, but that's irrelevant.

Unfortunately, the franchise ended up languishing during the eighth console generation; each of Ghost's titles received mixed reception, with particular criticism going to certain installments' major flaws. The 2015 reboot was criticized for its cringeworthy live-action cutscenes and for having an always-online requirement, and Payback was slammed for its luck-based, loot box-style upgrade system that strongly encouraged purchasing microtransactions, although 2017's Star Wars Battlefront II drew far more mainstream heat over it. The stigma lingered to Heat, which was better-received than the previous two entries, but still seen as not reaching the high points of the franchise. Meanwhile, Microsoft's Xbox Game Studios would take the licensed-car arcade-racing game crown from EA during this console generation with Playground Games's Forza Horizon series, which started in 2012 when it went against Criterion's Most Wanted, although during this generation the Horizon sequels were released on even-numbered years while NFS entries ended up releasing during the gaps in odd-numbered years. 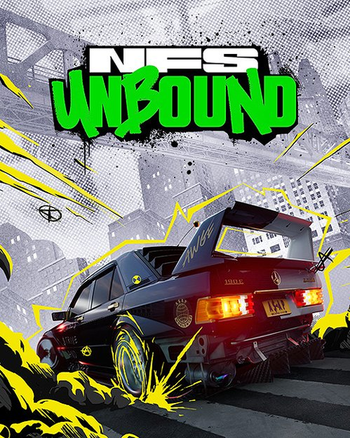 Need for Speed Unbound, the only original entry so far.

An uphill climb ahead for The Ninth Generation of Console Video Games.

On February 12, 2020, EA announced that Ghost Games would be reduced back to an engineering support studio for the entire company and resume using its former name EA Gothenburg, while Criterion would have the Need for Speed license back and resume being a primary developer again. Firemonkeys and No Limits were unaffected by this announcement, so they continue on to this era.

In June 2020, Criterion released the final update to NFS Heat, adding cross-platform play between all platforms it was released for, as they were ready to quickly move on from the mostly-maligned previous era. EA has shown brief glimpses of Criterion's first new entry during their 2020 EA Play Live online event, but they weren't much for fans to work off of. In October 2020, it was announced that a remaster of Criterion's first NFS entry, 2010's Need for Speed: Hot Pursuit, would be released for its tenth anniversary. Read more in the third era's folder above for that one. The next Need for Speed title wouldn’t be released until 2022

, and eventually Unbound was announced in October that year.

The logo was apparently going to be the same as the fifth era's save for a new font for the word "for", but it was only ever used on the official website. The abbreviated NFS logo from Heat was also kept for a while for the website and No Limits. Need for Speed: Hot Pursuit Remastered reuses its logo, complete with the lowercase-esque "N" in Need and the "N" logo emblem used from Undercover to Most Wanted (2012). In October 2022, EA introduced a radical new logo that, like with Heat, reduces it to just the initials, but is short, very wide, and invokes retro car logos from The '70s and The '80s.