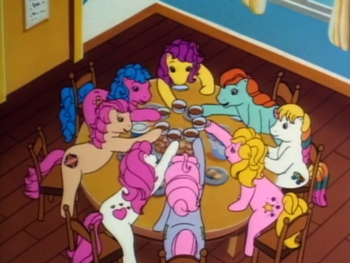 Sweetheart and Bon Bon are making their way to an abandoned house to have a tea party. Sweetheart scolds Bon Bon for eating some of the cookies she baked for the event, but Bon Bon assures her she's made plenty.

When all the girls are gathered, Starlight announces the topic for today's meeting: whether to allow boys into their club. Many of the others aren't on board with the idea, but Bright Eyes agrees, not wanting the club to be seen as prejudiced. Bright Eyes suggests they research the possible options, and vote on whether to allow them in at the next meeting, which the group agrees to do.

Later, Patch and Bright Eyes see two ponies take furniture out of the house, load it into a van, and drive away.

When Starlight is informed, she tells the group they have to catch the thieves before they steal anything else. They set several booby traps around the abandoned house in preparation for when the thieves next strike.

That night, the girls are waiting inside the house when the van from before pulls up. They return to their battle stations. The group consists of two parents and their son. The father can't get the door open, so he kicks it down.

When they enter, they all step into something sticky, which the son tastes and identifies as honey. Patch then pulls a rope, emptying a bag of flour over the three. She warns them not to come any closer, but the father does so anyway, only to slip on the honey on the stairs and fall down. Bon Bon and Melody then come out and fire at the family using slingshots. Angered, the mother chases after Melody, who leads her into a room with a frightening picture of a monster, causing her to run out.

The father and Patch get into a shouting match, but after Patch fires a plunger at him, he surrenders. Patch is satisfied, but then falls down the stairs (pulling the plunger off of the father's nose as she passes him). The fight then stops, and it turns out the family (the Barrington family) own the house and are moving in next week. The girls agree to help the family clean and renovate the house.

When the house is all fixed up, the family reveal a surprise they have for the girls: a new clubhouse! They immediately wish to have a tea party, and the son, Logan, asks if he can join their club, and Starlight calls a meeting in the new clubhouse to decide. Logan anxiously awaits the outcome of the vote, and to his relief, they allow him in. He then asks for some scones, which is met with silence until he remembers to add, "please?", at which the girls laugh and pass him a rather tall pile of scones in a basket.

"The Tea Party" provides examples of: