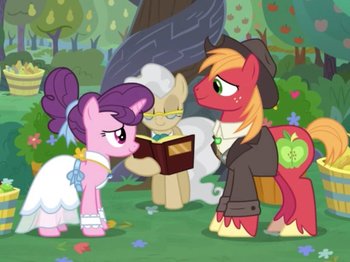 "I now pronounce you husband and wife. You may kiss the bride!"
Written by Josh Haber and Michael Vogel
Advertisement:

The episode is framed as Spike, Discord, the Cutie Mark Crusaders, Granny Smith, and Mrs. Cake explain to an unseen speaker that they were all trying their best to help with Big Mac and Sugar Belle's wedding.

From the perspective of flashbacks from Spike and Discord, Big Mac reveals his plan to them to propose to Sugar Belle by having a number of apples placed carefully around town, each with a riddle that would lead to the next, and eventually to a hill in Sweet Apple Acres, where he will build a bench like the shelves he build for Sugar Belle's shop and propose there. Spike, and reluctantly, Discord, offer to help; Spike will get a pie made by Mrs. Cake while Discord is responsible for planting the apples. In town, Discord finds Big Mac's little riddles rather sappy but goes and starts placing them. Sugar Belle, racing out from Sugarcube Corner, appears to miss the obvious apple Discord placed there, and finds that she keeps missing these as well.

Spike, meanwhile, finds that Mrs. Cake needs to bake twenty-one pies of various flavors and needs to place a small message in each, and can't get to Big Mac's request. Spike offers to help by using his fire breath to transfer the messages into the pies, but this ends up burning all the pies to a crisp. Meanwhile, a frustrated Discord transforms the apples into sentient beings and instructs them to deliver their messages correctly. However, his instructions are poor, and they start rampaging across the town. Discord teleports the apples all back to Sweet Apple Acres and goes to take Sugar Belle directly to the hilltop, but finds Big Mac no longer there. Teleporting Sugar Belle back to town, they run into Big Mac, Spike, and Mrs. Cake, while the Crusaders and Granny Smith are running away from a giant monster fused from the apples.

From Mrs. Cake and the Crusaders, Sugar Belle herself was planning to surprise Big Mac with her own proposal, by having Mrs. Cake bake the several pies so that each would have part of her proposal to Big Mac in them. Mrs. Cake agrees to do it but starts to get confused as to which flavor is which. As part of her plan, Sugar Belle has already had a special pie baked that she wants the Crusaders to deliver to Big Mac, as like the one he tried to bake her on Hearts and Hooves day, this pie has a message to bring Big Mac to Sugarcube Corner. The Crusaders go to Sweet Apple Acres, but can't find Big Mac, only that they are missing him by moments, though find his plans to make a bench and figure he is looking for help. The Crusaders try to check around town to find him, but have no luck. Eventually they return to the farm and ask a sleeping Granny about Big Mac, at which time the enchanted apples are teleported into the farm by Discord, and morph into a giant apple creature, intent on delivering their message to Sugar Belle. The Crusaders and Granny run from the creature back into town, running into the others.

Discord eventually disenchants the apples as the others all start to blame each other for ruining Big Mac and Sugar Belle's day. Big Mac, disappointed, goes back to Sweet Apple Acres, with Sugar Belle following him. He tells her he wanted to make this a special day, and he feels he keeps messing things up when it comes to their relationship. However, Sugar Belle encourages him to remember that his parents had a much harder time in getting to their marriage, and shows him Bright Mac and Pear Butter's rock and the intertwined apple-and-pear trees around it that they planted, a sign that their relations stood over that test of time. Sugar Belle is not upset that things didn't work out since their relationship is still strong, helping to raise Big Mac's spirits. In the shadow of the intertwined trees, both Big Mac and Sugar Belle propose to each other. Discord teleports the others to the spot with a celebratory meal as a way to make up for their failures earlier in the day.

Spike, Discord, the Crusaders, Mrs. Cake and Granny Smith finish up their stories to Applejack, minutes before the wedding ceremony, taking place on the same spot as Bright Mac and Pear Butter's ceremony.