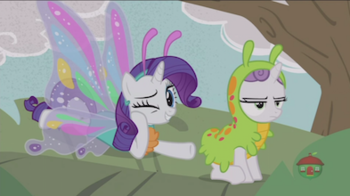 Rarity and Sassy Saddles are preparing the Canterlot Boutique for the transition from winter to spring (or, as Rarity calls it, "springsition"). While Sassy is a bit frantic, Rarity assures her that everything is under control — she's been working on all of the projects associated with the change. As she cleans, though, she discovers a picture of herself and Sweetie Belle playing together, and realizes that she's been so busy with her three shops that she hasn't spent any quality time with her sister in ages. Sassy soothes her boss's dramatic sobbing by offering to watch the shop while Rarity goes to Ponyville for a visit. Rarity eagerly agrees, and plans to make their day amazing.

Meanwhile, the Cutie Mark Crusaders are busy with their full-time work of helping a confused Pegasus — this time a colt named Chipcutter — find his destiny (it turns out he's a sculptor, given his tendency to make statuary out of his lunch). Back at the clubhose, the three celebrate another successful job and prepare to help Zipporwhill, who has recently lost the attention of her pet puppy, Ripley. Just as Zipporwhill arrives, Rarity busts in, and tells Sweetie Belle she has planned a day of activities for them; as she does, she unknowingly insults her younger sister by insinuating that her work as a Crusader is "cute." Apple Bloom and Scootaloo assure Sweetie Belle they can cover for her, and the two sisters set off.

Rarity and Sweetie Belle set out on a trip through Ponyville, with Rarity taking her sister to do all of her "favorite things." Unfortunately, Rarity seems unable to realize that Sweetie Belle isn't a baby any more, as all of the activities are decidedly childish: a puppet show (Sweetie Belle's more interested in experimental blackbox theatre now), eating (literally) bite-sized sundaes, and waiting in a long line for a balloon animal. Meanwhile, Apple Bloom and Scootaloo discover that Ripley is no longer having any fun playing with Zipporwhill, despite all of her efforts to play with his old toys and praising him as her "puppy." Sweetie Belle gets a chance to check in and notes that Ripley is awfully big for a puppy before Rarity whisks her off. Zipporwhill becomes dejected that she can no longer live up to her cutie mark.

Eventually, while they are taking pictures in funny costumes, Sweetie Belle tells Rarity that she's grown up now, and that she no longer likes doing such juvenile activities; the fight causes the younger pony to run off. Thinking she's being ungrateful, Rarity follows her as Sweetie encounters Zipporwhill by herself. Zipporwhill tells Sweetie Belle that Ripley doesn't even show interest in his favorite toy, a small chew bone, and Sweetie Belle realizes what the problem is. She brings Zipporwhill back to the others and explains that Ripley's a full-grown dog now, not a puppy; as such, he wants to play games appropriate for a dog his age. Rarity, who's been waiting to confront Sweetie Belle, overhears this and realizes that she needs to treat her sister the same way, instead of keeping her stuck in the past. The girls make up while Zipporwhill finds Ripley very interested in playing fetch-the-stick, restoring the bond between the two.

Rarity and Sweetie finish off the day with a new activity: enjoying giant, oversized sundaes that they can't possibly finish. The mare who runs the ice cream parlor takes a picture of the two, which ends up on Rarity's desk as a sign of the sisters' newly mature relationship.