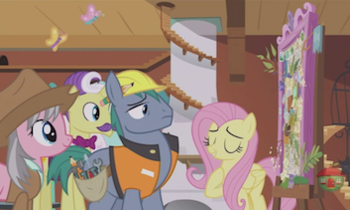 "I've got a dream, I've got a dream
You see, I'm not as meek and bashful as I seem!"
"Other ponies may be experts in their fields, but animals are my field of expertise. And if I say this is what I want, then this is what needs to happen! Oh, um... for the animals of course."
— Fluttershy
Written by Gillian M. Berrow
Advertisement:

Angel Bunny hurts his paw while doing a stunt in Fluttershy's cottage, and as she's out of bunny foot braces, she takes him to see Doctor Fauna, the local veterinarian. However, Fauna's office is swamped with critters of all types, thanks in part to Fluttershy's recommendations to others about how excellent a vet she is. Fauna notes it's not so much dealing with the injured animals, but clearing out the ones that are just recuperating, taking up her space and time.

Fluttershy gets an idea and gathers her friends to show them a dream that she's had for some time: to create an open-space animal sanctuary near Ponyville. Pinkie, Applejack, and Rarity all suggest she get help from some ponies they know: Hard Hat, one of the fastest construction ponies in the town; Wrangler, who knows how to handle animals; and Dandy Grandeur, an interior designer. When they all arrive to see about Fluttershy's idea, she presents them with a "dream board" idea of what her sanctuary would look like. The three balk, seeing that Fluttershy seems to lack any concrete plans, but still agree to help.

The experts privately disagree with the ideas that Fluttershy presents to them and instead start designing the sanctuary as they see fit. Hard Hat reuses his blueprints for the Ponyville hospital, Dandy puts up ornate curtains, and Wrangler sets up cages with pillows inside. Fluttershy becomes upset with their efforts and fires all three, just before Fauna arrives with several of her animals to see the progress. The animals run amok and destroy the half-built project.

Later, Fluttershy meets again with the Mane Six, with Pinkie, Applejack, and Rarity apologizing for their associates' behavior. They all agree to help, and Fluttershy calls in a favor from Big Daddy McColt to help with the construction. The ponies quickly get to work, now following Fluttershy's concept, and soon the sanctuary is completed. Fluttershy brings Fauna and the animals back, and they are all impressed with the work, with Fluttershy especially pleased to have finally achieved her dream project.