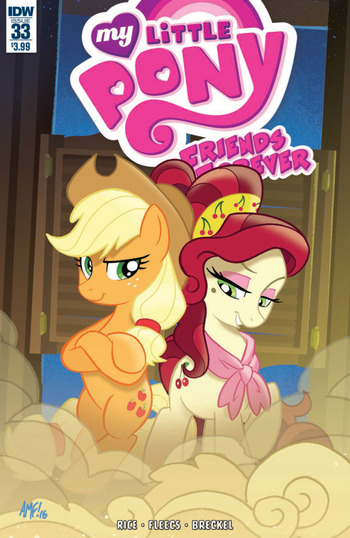 An equine flu epidemic has struck Cherry Jubilee's cherry orchard in Dodge Junction, but Applejack has offered to come by to help with the harvest season. As she is out bucking cherry trees, a traveling sideshow, "Buffalo Bull's Wild West Show", passes nearby, and its star, Calamity Mane, asks AJ if they can stay at the orchard for the night, as several of their members have also come down with the flu. AJ figures it is okay, and goes to Cherry know, but she reacts with anger upon hearing the name and demands that the show be off her property by the next morning, as well as AJ herself when she tries to argue for the troupe. AJ passes word on to Calamity Mane, and realizes that there's some bad blood between Buffalo Bull and Cherry Jubilee, but as Buffalo Bull is also down with the flu, she can't get a straight answer from him either.

With the troupe still sick the next day, AJ offers to go into town to find some medicine, but more to try to think of a solution. Passing by a library reminds her of Twilight, and she spends the next few hours studying up on Dodge Junction's history, soon coming to find out enough information to go back to Cherry with. Back at her ranch, AJ explains that she saw pictures of Cherry with Buffalo in the newspaper and knew they were friends once. Cherry tells her story, that she was one of the first members of Buffalo Bull's show, but he suggested she use the stage name "Calamity Mane" for the act. The show was highly successful, and the two became closer, and while they were in Dodge Junction, he proposed to her. Surprised, she panicked, and disappeared for a solitary walk to think about it, but when she came back, found that the show had moved on without her. She set down her roots right there and grew out the cherry orchard as of today. When Cherry heard that Buffalo had "another" Calamity Mane, she was angered that it seemed like he just replaced and forgot about her.

Retelling her story induces Cherry to go and speak to Buffalo Bull directly and demand they leave, despite still being sick. AJ scolds her that she shouldn't make too hasty a decision, reminding her how she herself was too prideful to return to her friends after losing the rodeo the last time she visited. Though still upset, Cherry and Buffalo quickly realize that they let the situation in the past get out of control, and it was never meant to end that badly. They still care for each other, and quickly make amends.

A week passes and the equine flu is cured. Buffalo puts on his show for Dodge Junction, and allows Cherry to take the stage as his former Calamity Mane. Cherry blesses the new "Calamity Mane" as her rightful heir to the name, and thanks AJ for helping to repair a past friendship.

Tropes appearing in this issue: