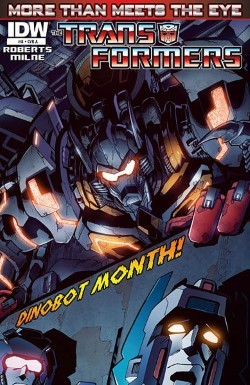 This is our badge, not theirs.
-Crankcase

Issue: #8 note the annual takes place between issue 7 and this one

Ten thousand years ago, on a war-torn Clemency, a Decepticon ship flies over the area. Inside, an energetic bot called Torque tries to chat up a dour Fulcrum, who doesn't respond to Torque's questions. Soon the call comes, and the K-Class soldiers line up and jump out...

Now, on Clemency, the Scavengers panic at the news of the D.J.D's approach, and the fact that when they arrive they'll likely kill everyone there, for whatever reason they can think of. They can't persuade them to leave the Scavengers alone, they can't out-run them, and as Fulcrum points out, fighting them is basically "suicide with delusions of survivial. And yet Crankcase, Krok and Spinister insist, because the Decepticon badge belongs to them, not the D.J.D.. But in order to fight the worst of the worst, they'll need a plan. And someone left them a perfectly good Dinobot they could use...

Meanwhile, light-years away on the Lost Light, Chromedome and Skids meet up on the ship's oil reservoir so that Chromedome can use his mnemosurgeon skills to read Skids's mind. Chromedome takes the time to point out Skids puzzles him, having known him since "the heist", he notes Skids wasn't the hardiest of individuals at the time, and he thought he'd been killed. Skids retorts he didn't die, he joined the Diplomatic Corps. Which as they both point out doesn't explain the martial arts skills, or the arsenal of guns on his person. Conversation turns to Chromedome thinking Skids liked amnesia. Skids admits that while he did enjoy the freedom, after what happened on Theophany, he feels abandoning those memories is a betrayal, and now he wants Chromedome to help him recover his old memories.

Back on Clemency, and a stasis pod has been left out in the open, Grimlock inside and laced with the same Circuit Speeders Misfire "sampled" a few hours ago, so that when the D.J.D. arrive he'll attack them. Just as Krok explains this, they get buzzed by Tarn. On hearing his target is dead, Tarn is upset, having wanted to kill Fulcrum himself. Before the K-Class soldier can explain, the D.J.D. land, and approach the pod.

With a flick of a switch, Grimlock comes out roaring. And quickly finds himself overwhelmed. Realising something's up, the Scavengers start to flee, only to find their path blocked by Helex.

Meanwhile, Chromedome is going through Skids' memories. The last year or so, he finds, is completely gone, wiped clean. As he goes further, he abruptly stops. According to him, something so horrific happened to Skids he blocked out all the memories associated with it. Chromedome could, in theory, dig them up, but he's too concerned about what that would do to Skids. Accepting this, Skids asks if he was able to find anything out about that song going through his mind. Chromedome informs him it's the Empyrean Suite, and for Skids's sake he hopes he never learns any more about it...

Elsewhere, the D.J.D. have routed the Scavengers. Tesarus managing to insert Flywheels into his grinder, instantly killing him. Vos detaches his face, with turns out to have all manner of spikes and drills on the other side, forcing it onto Krok's face. Misfire's attempts to save him fail, and he's jumped by the team's pet, a Sparkeater. Crankcase is sent flying by Helex, and Fulcrum... flees, leaving the grumpy Decepticon to wonder what made them think they could survive. And then Crankcase sees something impressive.Tarn, meanwhile, has Grimlock at his mercy, and begins taunting him with the fact that out of the entire army, out every Decepticon in the whole universe, he's somehow fallen in with the six biggest failures of all.

At which point a giant foot smashes into the D.J.D. leader, as Crankcase introduces the ferocious Mighty Mega Puncher, one of several Cybernoughts contained aboard the P-6 ship. However, despite the dramatic entrance, it's quickly fried by Kaon, and blasted by Tarn, who yells at Fulcrum to show himself. The Genericon appears, standing aboard the ship with a speech prepared, and despite Tarn saying no-one cares, Fulcrum tells him he's going to listen. He was born to a Decepticon Empire at its height, doing the good work cleansing the inferior organics, and what went wrong was thugs like the D.J.D., but the Scavengers, the failures among failures, rekindled his faith by fighting on his behalf even when he didn't deserve it, so Fulcrum declares that in their name, and for all those the D.J.D. murdered, he's going to jump.

As Fulcrum jumps, he turns into a bomb. Despite Tarn's concern, Fulcrum's landing is anticlimactic, with no explosion whatsoever. Then Kaon pipes up, declaring he's found "his" energy signature at last. Elated on discovering Overlord, Tarn orders the Department to fall back. As he leaves, he informs the Scavengers, the ones who can still hear him, that they've made The List.

As they leave, the Scavengers stand over Fulcrum, who is much to his confusion alive. As Misfire belatedly explains, when they found him, first thing Spinister did was remove that explosive charge he had. As Crankcase approaches with Krok, Spinister himself asks why Fulcrum was on The List in the first place. So Fulcrum explains: he was convicted of cowardice, after fleeing from an Autobot attack due to not being a soldier. After being caught, he was sentenced to execution, until Megatron ordered the creation of the K-Class. Fulcrum was refitted, and like all K-Class soldiers designed to transform when he jumped... only when he jumped at Clemency, nothing happened because he was so afraid.

But the other Scavengers aren't listening, their attention drawn to Grimlock. Helping him up, Misfire tries to talk to him, but something's wrong with the Dinobot. He's not speaking. From what Fulcrum can devise, he's essentially brain-dead, probably the reason he was left behind. Misfire states they should take him with them. After all, if the Autobots won the war, they'll want their comrade back, possibly enough to pardon them. If it's the Decepticons, they'll be heroes for delivering a big name Autobot to Megatron. So with their hope sort of restored, Misfire tells them to set course for Cybertron!

... after they see to Flywheel's remains, first. After all, there's some good parts still un-shredded, and at least a few sips of energon left.

Eighteen months later, as the sun bakes the stripped-down remains of Flywheel's corpse, a shadow falls across it. The Necrobot has come to record Flywheel's death... right after Hound, Chromedome, Drift and Ultra Magnus.