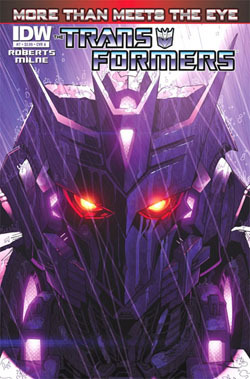 The War won't be over until Megatron says so

On a distant planet, someone describes the history and accomplishments of the legendary Phase Six Decepticon Black Shadow, while asking about the tendency of Phase Six 'cons to rebel. This someone, named "Tarn", is interrupted when one of his co-workers points out that Black Shadow isn't actually dead. Though he really wishes he was. He's just been found by the Decepticon Justice Division. Tarn, their leader, decides to talk with the badly injured fugitive, who tries to tell him that the war is over. Tarn responds that until Megatron says otherwise, it isn't. So Black Shadow has to die for letting the cause down. Having already experienced much of the skills of the rest of the D.J.D., Black Shadow is introduced to Tarn's ability: Weaponized conversation, which kills Shadow, and causes what's left of him to combust. The D.J.D. then move on to their next target, who committed the heinous crime of living...

On-board the Lost Light, Ratchet, Ambulon and First Aid manage to save Rung, something Ratchet declares is a bona-fide miracle. Five hours later, a more panicked than usual Red Alert visits the shrink, and shares his fears about Overlord, and his belief that "They" are going to kill him for knowing. So he leaves a data-slug in Rung's hand, and walks off, unaware that the Diagnostic Drone present has been watching, carefully.

Somewhere else, a Decepticon named Fulcrum comes to when a bunch of his fellows are trying to siphon his fuel. After a brief misunderstanding, he asks why exactly these 'cons thought he was dead. Their leader, Krok, explains that this was because aside from themselves, they're the only beings alive on the whole planet. Hurried introductions, courtesy of the drug-addled Misfire, quickly follow.

Back on-board the Lost Light, Chromedome visits Brainstorm to talk about Skids' gun, the one he didn't realize he had, that Chromedome stole when he wasn't looking. Brainstorm tells him it's called a 'binary gun' - although he's just invented the name. It's got a strange design - there's only room for two cartridges. But more worrying than that, it's Institute tech.

Back with the Scavengers, they talk about the planet they're on, and how despite it being a mass graveyard, it's just another footnote in the War. Conversation turns to how the war is over, a fact Fulcrum can barely believe, and he doesn't know how to feel about it. The Decepticons glumly speculate that the Autobots probably won. Then Spinister says the fire is giving him odd looks. Krok spots an Autobot in the flames, and shoots him dead.

In the sickbay of the Lost Light, an unknown figure arrives and takes the thumb-drive from the comatose Rung...

Daybreak with the Scavengers, and Misfire is distracted by his quest to find the Necrobot, a mysterious figure who appears over the corpse of every dead Cybertronian. However, instead of a 'bot, he finds a huge crashed spaceship; a Decepticon one at that. They investigate, and what they find is all kinds of disturbing. Misfire fnds a ceiling covered in brains. Krok finds a lab full of half-grown protoforms, and a robot made of wood. Fulcrum finds walls covered in what appears to be blood. They regather, and Misfire suggests turning and getting the hell away from the ship. Fulcrum however takes it as a sign of how random the universe is, and that they're finally free.

Then Krok reveals he's getting a call. It's from the D.J.D, informing them that they'll be there in fifteen minutes, and if they hand over the traitor in their midst, they get to live. Panic immediately follows, until Spinister points out Tarn counted eight life-signs, even though there's only seven of them. Then Krok notices something through a door. It's a stasis pod, and inside...